Another post from my old Marvel blog, this one part of a series concerning my earliest days at Marvel.

April 28, 2007 | 1:00 AM | By Tom_Brevoort | In General A bit of a short entry today, focusing on the material found to the left. These are pages from a short booklet providing guidelines to writers wanting to pitch stories. The individual cartoons were done by former Bullpen letterer Rick Parker, who thereafter went on to draw the BEAVIS & BUTTHEAD comic book. I seem to be missing a sheet of these from the booklet, and I don’t think the final booklet was ever finished or distributed. But this does give a good idea as to what editors were looking for in a story during this period (or immediately before–the reference to “Jim” on one of the pages refers to Jim Shooter, Marvel’s editor in chief through 1987, so this booklet appears to have been started while he was still in charge.)

I got copies of these pages while an intern. And, like virtually every intern before or since, I attempted to pitch a story before I left. Mine (co-written by my writing partner Mike Kanterovich) was a WHAT IF…? story focusing on what might have happened had the Silver Surfer not betrayed Galactus in their first story in FF. I never heard anything from Craig about it after I handed it in, not even once I came on staff and began writing other things for him–so either he gave it a quick look and decided it was unusable, or he never found the time to read it.

I also interviewed for an assistant editor position before my internship was up, recommended and championed by Bob Budiansky and Greg Wright in particular. It was in the Howard Mackie office, which at the time handled the AVENGERS books, ironically enough. Howard’s assistant David Wohl was leaving and he needed a replacement. I don’t think I made a very good showing in our brief interview, and Howard wound up hiring Len Kaminski instead. As Len was a friend who I’d known somewhat even before coming to Marvel, it’s hard to argue with his choice–especially given that Len had been on-staff as the assistant to Bullpen manager Virginia Romita for a year or two, and so was much better known by the staff as a whole at that point.

Tomorrow: Tom gets hired, an exciting photograph of a beardless Tom in one of his earliest offices, and Fred Hembeck! 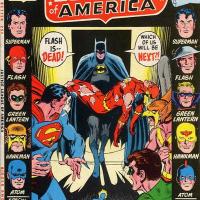