I had been steadily enjoying Marty Pasko’s run as the writer of SUPERMAN just about since it began (I had missed/skipped his first issue.) This wasn’t a loud appreciation, I wasn’t waiting with baited breath for each new release. Rather, it had quietly become a title that I enjoyed each and every time I picked it up, and so I continued to do so regularly. The fact that Pasko was mixing in a little bit of Marvel-style soap opera and continuity with his solidly-constructed Julie Schwartz stories didn’t hurt at all–SUPERMAN seemed to be the title in which the Man of Steel’s life moved forward, rather than remaining static–even if most of those moves were minor and cosmetic.

I bought this issue at the 7-11 on one of my regular Thursday visits, just as soon as it came out. The book was in the midst of a long Parasite story, which had begun as a two-parter featuring the Earth-1 Solomon Grundy. But we were getting down to brass tacks here. At the start of this issue, Superman had broken into a secure government facility in the prior installment, one dedicated to safeguarding the Earth from alien attack. Superman was also experiencing mood-swings, and here he’s completely outraged to a ridiculous degree that he wasn’t trusted with this information. As the base’s guards move in to engage him, he clobbers the lot of them in his outrage.

On the grounds outside the base, Perry White and Lois Lane are stopped by guards as well. They’re worried about Superman, and White, having seen what transpired in the last issue, has put his finger on the problem. Superman almost destroyed the helicopter they were traveling in by gripping it too hard. His powers seem to have been increased, and he’s having a difficult time keeping them under control. He’s literally become drunk with power, and is a danger both to himself and those around him.

This is all the work of the Parasite, who has reversed his usual M.O.–rather than siphoning the strength away from Superman, he’s instead increased his foe’s powers. He’s planning on ransoming Metropolis for one billion dollars after Superman’s increased instability causes the Man of Tomorrow to kill himself as a release from his pain. And, indeed, Superman is currently suffering–his superhuman senses have all suddenly gone berserk, causing him to see and hear everything on Earth all at once in a maddening cacophony

.There’s a really nice moment here where Lois takes the initiative and talks Superman through focusing on the sound of her voice, focusing on each sensory power in turn and getting them all back under control. The three-panel sequence where Superman can first see Lois’s skull through her head and her face comes into sharp focus across the three images is very effective.

Unable to trust himself even to fly with his increased powers, Superman walks back to Metropolis through the bay. Arriving on shore, he’s suddenly jumped by the Parasite, who proceeds to battle him and make his power problem grow–to say nothing of Superman himself, who bursts out of his costume. This, it turns out, is nothing more than a dream Superman is having–or a way for Pasko to get some colorful action into an issue that’s been mostly introspective up to this point. It’s not entirely successful, but it does reveal that Superman has an inking that the Parasite is behind his power woes.

This is because, in those moments where he was seeing and hearing everything on Earth, that included the Parasite–and while his conscious mind had no recollection of what he’d seen and heard amidst all of that input, his subconscious mind certainly did. Superman’s also worked out a cure for his situation–flying haphazardly to his Fortress of Solitude, he creates a super-sunscreen for himself, one that will cut down on the amount of solar radiation he’s absorbing and thus cut back his powers to their normal levels. Thus restored, Superman seeks out the Parasite.

But just because the Parasite’s ploy has been undone doesn’t mean that he’s beaten. He’s planning on blackmailing Metropolis or else he’ll turn the alien defense array on the city, vaporizing it. And now that his attempt to over-power Superman has failed, the Parasite goes back to his tried and true methodology–robbing the Man of Steel of his powers and sending him plummeting towards the ground below! And there, we are once again To Be Continued! 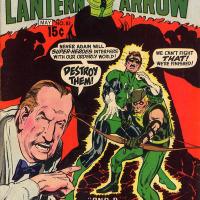 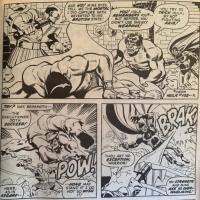 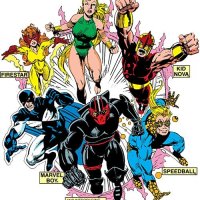