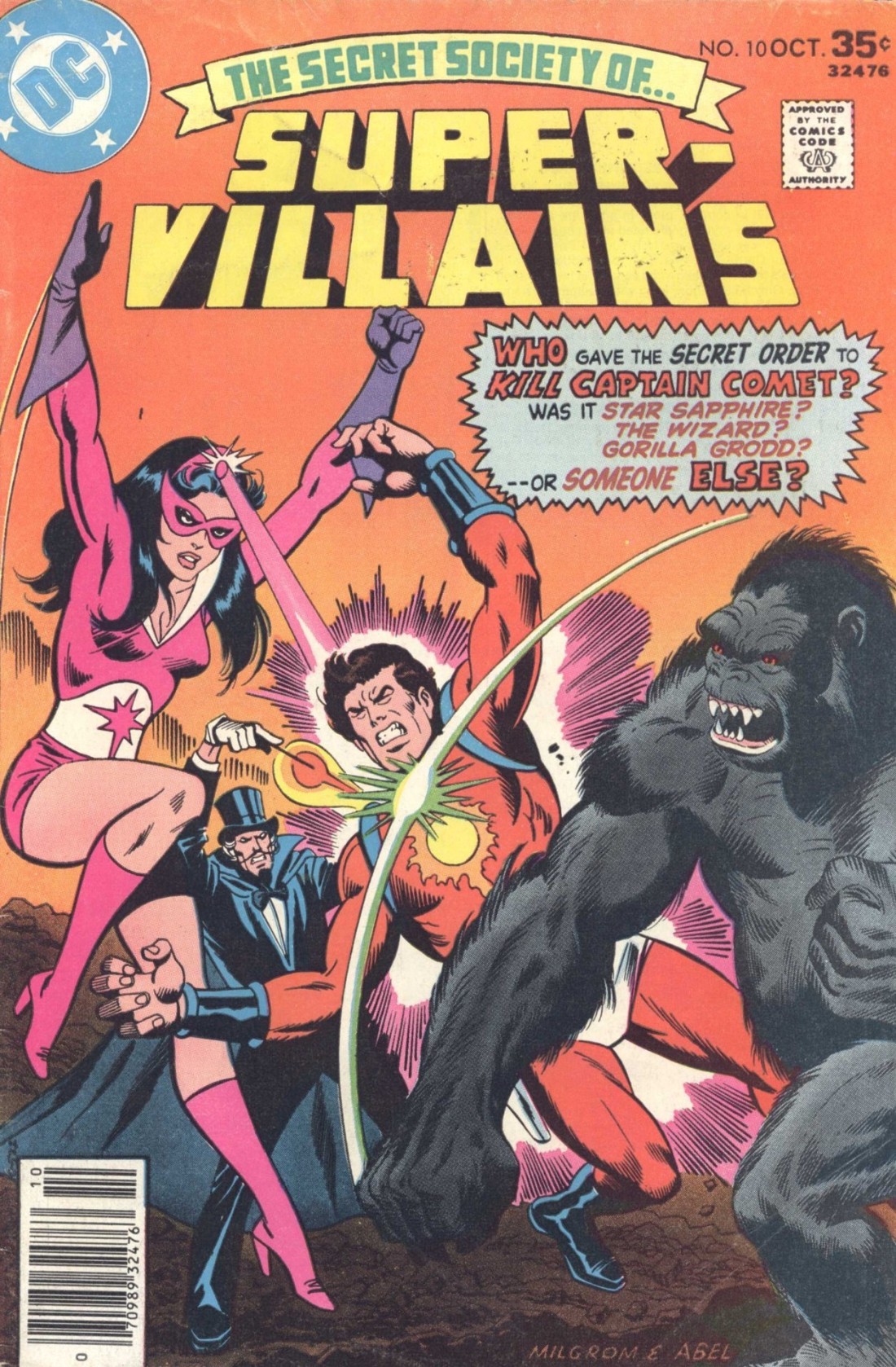 The next book I would have picked up was this issue of a favorite regular title, SECRET SOCIETY OF SUPER-VILLAINS. Here, the cover copy tries to make some hay out of a question that isn’t much of a question at all, given that the Secret Society has been trying to kill Captain Comet for something like nine issues already–so it’s not like Grodd or the Wizard would need somebody to give a secret kill-order on him. Nevertheless, the blurb follows a long-standing DC tradition of posing a question to the reader the answer to which can only be found in the story within, a proven marketing tool.

At this stage, the writing of SSoSV had ping-ponged back to series originator Gerry Conway, who was in the midst of a cycle of stories in which the Society had been hired to retrieve a series of mystical objects that had previously shown up in an old WORLD’S FINEST story. And this particular issue also intersects with Conway’s ongoing “Atom’s Quest” storyline that was appearing in SUPER-TEAM FAMILY at the same time. As a boy, I can remember that this was both exciting and confusing to me–especially in that I could never be 100% certain to be able to find every issue involved.

This issue opens with Star Sapphire returning to the Sinister Citadel from a scouting expedition, during which she followed and spied upon Captain Comet. Doing so, she learned about the Atom’s ongoing search for a cure for his girlfriend Jean Loring, who has been driven mad and imbued with the power to create catastrophes. Sapphire proposes that the Society take custody of Loring and use her abilities to their own purposes. To that end, Funky Flashman assigns the undercover Creeper to assist Star Sapphire with the abduction, while the rest of the Society continues on its mission to assemble the mystic artifacts. Short-handed as this leaves them, Grodd and the Wizard shanghai Flashman himself to assist in their theft of an invisibility cloak from a S.T.A.R. laboratories facility.

Meanwhile, Captain Comet himself has also become aware of the cloak’s location, and even though Kid Flash has had to leave for a Teen Titans meeting that absolutely must have been more important that preventing an object of power from falling into criminal hands, Comet is determined to follow through on the mission. He’s shadowed by the Trickster, who wants the cloak for himself and is using Comet as a stalking horse. But the pair arrives in Denver too late, as they see Grodd’s quardromobile blasting away from the lab, presumably with the stolen cloak.

A big ol’ fight breaks out during which Captain Comet takes the worst of things, despite the diminished magical capacity of the Wizard. Seeing this, the Trickster decides to cash in his chips and leave the pursuit of the magic items to others, thus exiting the story. Elsewhere, Star Sapphire and the Creeper head to Lemuria, where Jean Loring is under observation. They fight their way in past the Lemurian guards, despite the Creeper pulling his punches, find Jean, knock Ray Palmer senseless and make off with her. That’s the last we see of Jean in this story, though–what the Society has done with er will have to wait for another issue of SUPER-TEAM FAMILY.

Later, the Society rendezvous to assemble the mystic items so that they can be delivered to their mysterious benefactor, when they are attacked once more by Captain Comet, who has tracked them there, wanting to find out the identity of the mastermind. In the brawl that follows, Grodd once again fells Comet, but prevents Star Sapphire from killing him for his own reasons. During the melee, Flashman makes off with the loot, followed by the Creeper, who himself has been trying to get to the bottom of the heists while making use of his reputation as a criminal. Waiting in his identity as Jack Ryder while Flashman leaves the goods in a bus terminal locker, Ryder is startled when it’s the Wizard who shows up to pick up the loot–he is the one who has been pulling the strings! Or is he? he vehemently denies it at the very least.

At this point, the Creeper figures that his part in the adventure is done, and that Captain Comet can handle catching the rest of the Society–what’s with all of the super heroes who pass through these pages having no follow-through anyway? It’s almost as though there needs to be an ongoing title or something! Meanwhile, Funky makes his way back to the Secret Citadel, only to find it already occupied by Grodd and a new line-up of villains, including once-member Sinestro and Bizarro and Poison Ivy. Grodd tells Flashman that he’s out–and this adventure will be continued in the SECRET SOCIETY OF SUPER-VILLAINS Special, on sale soon. Unfortunately, I was never able to find that Special, and so I was frustrated for years in learning what these guys were up to.