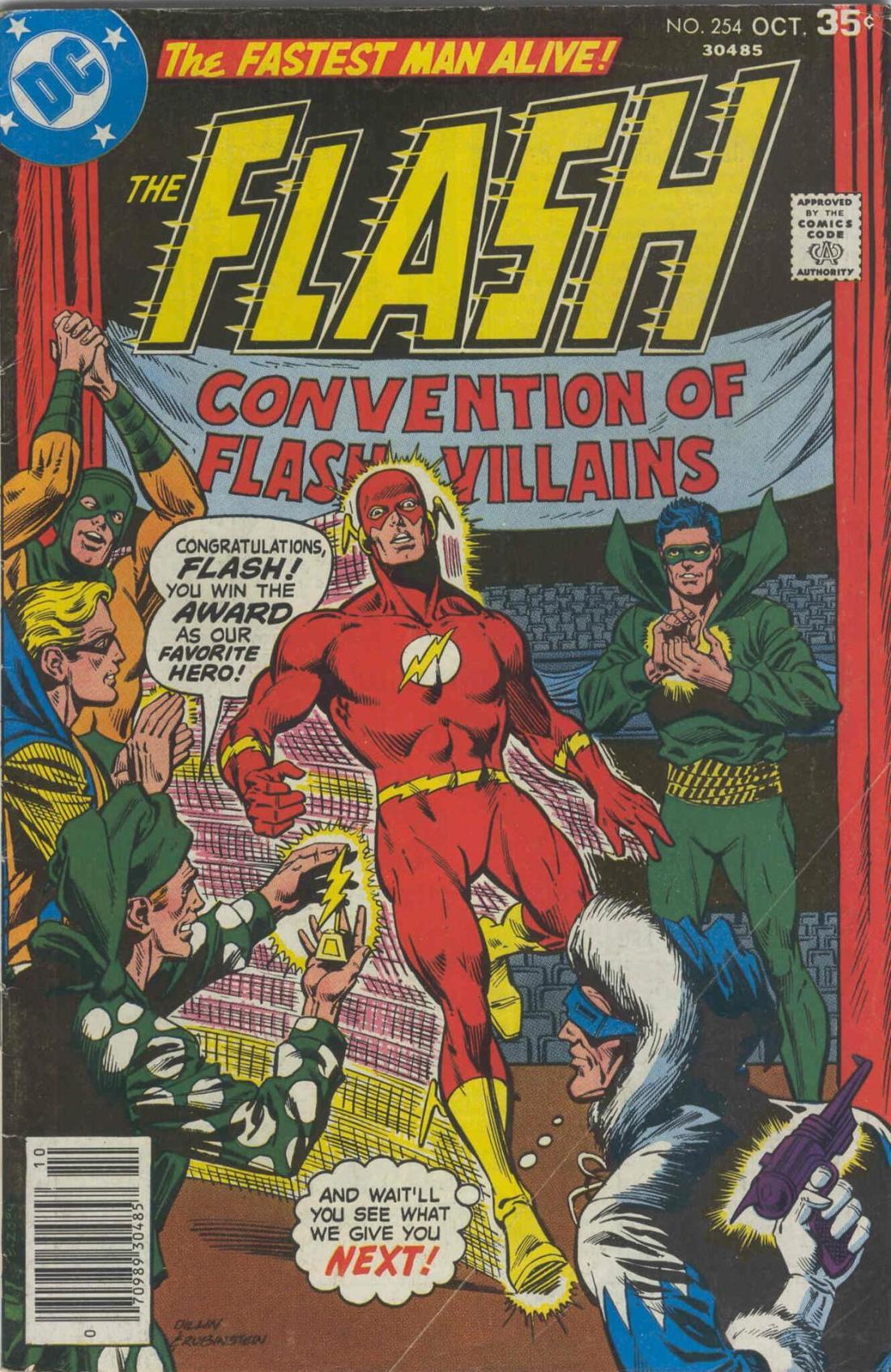 The school year had ended, and summer loomed before me. It would end up being a significant summer for me, from the point of view of being a comic book reader. At the same time, I was a bit sad to have left fourth grade. I’d had a rough time socially in most of my previous classes, but my teacher that year, Brian O’Leary, was supportive and even encouraging about my comic book obsession and my tendency to draw and make my own home-grown comics.

And as if to inaugurate that summer vacation, the mailman arrived with the first of my two subscription books, this issue of FLASH. Actually, I have a dim memory that both this issue and the same month’s JUSTICE LEAGUE OF AMERICA turned up on the same day, a double dose of colorful adventure. Here was another reliable release from the creative team of Cary Bates and Irv Novick, inked as in most cases by Frank McLaughlin, and edited by Julie Schwartz. It was as predictable and regular as picking up a Hershey bar–always the same, always good, always consistent.

The issue opens with the Flash rescuing a little girl and her kitten who are out on a high-rise ledge. While doing so, the Scarlet Speedster catches a glimpse of his old foe the Mirror Master inside one of the other apartments. He proceeds to create a vortex to pull the Mirror Master out of the room–only to instead get the very surprised resident of that apartment instead. Mirror Master has tricked him with an illusion–and Flash pursues the retreating image to a lonely windmill on the outskirts of Central City, where he’s startled to discover that his Rogue’s Gallery is holding their annual convention.

The idea that the Flash’s villains hold their own regular version of a comic book convention had been established some years before, and it’s both an absurd and yet somehow-fitting concept for these colorful Rogues. Paralyzing the Flash with Captain Cold’s special dry ice, the villains proceed to present him with a Roscoe award (named after deceased Flash villain the Top), for all the times he’s defeated them. Flash is able to overcome his paralysis and create a whirlwind that destroys the windmill they’re all in–but in the aftermath, both the Rogues and even his award are gone. As he races away, another mysterious, shadowy figure watches him depart.

Returning to the Allen household, things begin to get strange for the Scarlet Speedster. His boarder Stacy Conwell is back from an exchange program in Europe, but Barry discovers the coed performing demonic sorcery in her room. When he goes to tell Iris about what is happening, there’s no evidence of what he’s seen. What’s more, a news report indicates that the girl and kitten he rescued earlier in the issue were actually saved by the Central City fire department. Confused, Barry suddenly finds himself vibrating through the floor of his home.

Donning his costume, Flash is confronted by the malefactor behind some of his recent woes–Mazdan, a criminal from the far future who was one of the Flash’s first enemies. Mazdan has escaped from imprisonment in the future, and intends to pay back the Flash for the suffering he endured while incarcerated. Swifter than the eye can follow, Flash defeats his futuristic foe–only to discover that the entire encounter has taken place all in his mind. He’s still standing in the kitchen of Barry Allen’s house. What’s more, the Roscoe Award is sitting on a shelf nearby, but only Flash can see it.

Flash realizes that the award, and indeed his entire encounter with the Rogues, must have been a similar illusion implanted into his mind. He then receives a JLA alert and speeds of to rendezvous with his allies, encountering the Trickster along the way. Flash swiftly clobbers the Trickster, then links up with Hawkman and Aquaman–who being to play a demented game of Ring Around the Rosey. Flash realizes that all of this must be another of Mazdan’s illusions, and indeed, he finds himself standing in an empty field a moment later, no longer able to distinguish fantasy from reality.

But there’s more going on than Flash realizes. We cut to a nearby warehouse, where the Rogues are comparing notes on their latest scheme. Because, while they aren’t responsible for the Flash’s bouts with illusions–and are themselves baffled by them–the Roscoe Award they gave to him is entirely real, and is a part of their own plot to destroy their foe. So, caught between two sets of enemies, one of which he doesn’t even realize is gunning for him, unable to tell what is real and what is illusion, and with the deadly Roscoe Award still sitting on a shelf in Barry Allen’s home, we are To Be Continued!

In her regular Publishorial this month, Jenette Kahn talks about the reasons why a particular title might be discontinued, and goes to far as to quote competitor Stan Lee from a recent distributors meeting. It’s an interesting piece to read, especially all these years later–these sorts of columns were the closest look any of us got to understanding the inner workings of the comic book companies that produced our four-color fantasies back in the 1970s–a time when the whole business was very different than it is today, and running almost entirely on the returnable “newsstand” distribution model.