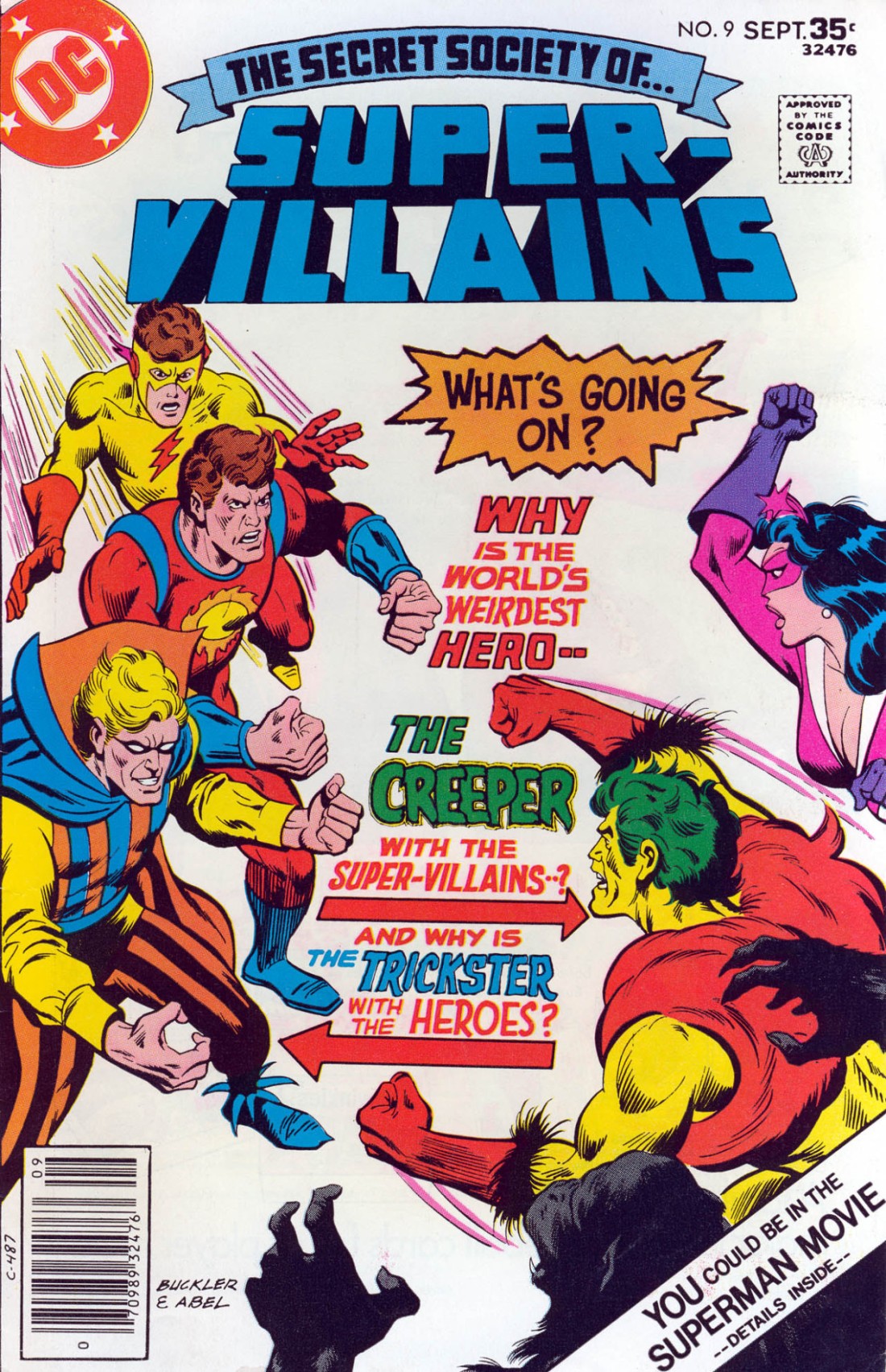 Fairly certain that I bought this issue of SECRET SOCIETY OF SUPER-VILLAINS at the same time as the SHOWCASE issue I previous wrote about. Now that I had direct access to my local 7-11, I was able to pick up comics more frequently and in greater number, assuming that I had the cash to pay for them. It would wait until the summer, though, for me to do the legwork to figure out that new books arrived there on Thursdays, so that I could get them as soon as they came out.

I’m told that the treatment of Flash for the Trickster in this issue of SSoSV inspired his appearances years later as a supporting player in the BLUE DEVIL series–not a bad legacy for a random 1970s comic book. The series was once again in the hands of its originator, Gerry Conway, and so Gerry steered certain subplots–in particular the background of Star Sapphire–back in the direction he’d initially intended. As a reader, I found this strange push-and-pull pretty confusing.

At the Sinister Citadel, the Society is continuing to follow up on its latest contract: to secure for a mysterious benefactor a series of enchanted items. But Gorilla Grodd was captured last issue, and so Funky Flashman probes his computer files for the perfect replacement. Unfortunately for Funky, he pulls up the file for the Creeper, actually a hero who has been mistaken for a criminal by the authorities. Some days you just can’t win for losing.

So while Star Sapphire heads out to recruit the Creeper, we segue to Grodd in police lock-up. But he’s able to telepathically summon his underground boring vehicle and make his escape. Elsewhere, on the outs with the Society is the Trickster, who approaches Kid Flash with an offer to join forces, bringing along the plans for the Society’s current caper.

And so, when the Society plus the Creeper travel out to Wine Country in response to reports of the mystic box being found, they are ambushed by Captain Comet, Kid Flash and the disguised Trickster. And so, a brawl breaks out–with the Creeper trying to maintain his cover without either injuring Captain Comet or Kid Flash, or being captured by them. What a spot!

The whole thing devolves into an extended game of keep-away, as possession of the box passes from character to character. The Trickster tries to just snatch it up and run, but he’s brought low by Grodd, who evades capture in his Quadromobile and eventually manages to get the damned box open–unleashing the mystical dragon that had been penned up inside on everybody.

Fortunately, the dragon is susceptible to light, particularly that in the ultra-violet range, so Star Sapphire is able to drive him back into his containment before taking off with her fellow Society members in tow. Captain Comet would like to go after them, but Kid Flash was injured in the conflict and needs medical attention. And so, like so many other issues, this story ends with Comet once more vowing to bring the Society to ruin and its members to justice.

The letters page this time out was turned over to Funky Flashman himself, so that the Funkster can unveil the Society’s new secret code, used briefly on one page of the preceding story. This new innovation didn’t last all that long, but it was fun, albeit just a hair juvenile–it points towards the audience that DC felt was their primary readership at the moment (and one that I was certainly a member of at that time.)