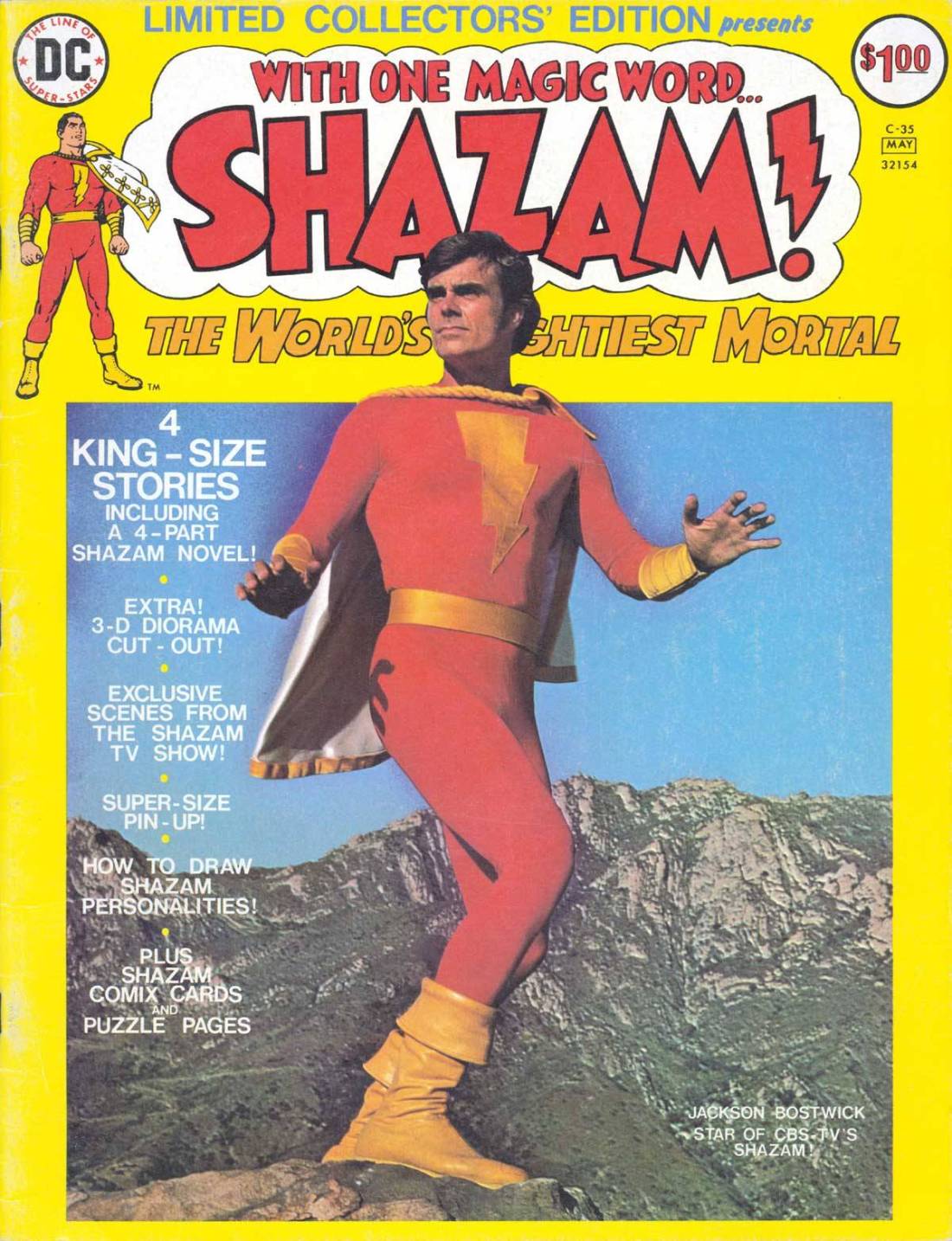 This SHAZAM Treasury Edition featured Saturday morning’s Captain Marvel, Jackson Bostwick, on its front cover, a transparent though appropriate attempt to appeal to fans of the show, then-airing. I can’t say that I was especially a fan of the show–I watched it, but primarily because it was there. In those days of limited television channels, any span of time was negotiated based on what the best option available might be. But I did like the source material, and this Treasury Edition is a strong showing of classic Captain Marvel material

The lead-off story isn’t especially memorable, but it is beautifully illustrated by C.C. Beck. Because Mr. Morris wants to take up hunting but can’t bring himself to actually shoot anything, Doc Quartz builds him a robot game preserve to hunt on–and then things go awry. Captain Marvel is on hand to make sure that everybody makes it out of the story intact, animals included.

This is followed by one of the most celebrated Captain Marvel stories ever produced, the book-length four-chapter epic that originally appeared in CAPTAIN MARVEL ADVENTURES #100. It opens with Sivana plotting against Shazam, but not knowing where the old Wizard is. Billy makes an unfortunate mistake when he takes curious Tawky Tawny to me the wizard, and they learn that Shazam can survive in his spirit form due to his bracelet made of Shazamium, the source of many of his powers.

Sivana waylays Tawny and probes his mind for the location of Shazam. .Eluding the pursuing Captain Marvel, he uses his time-ship to journey back to the day when Billy was first granted the power to become Captain marvel, intending to prevent that event from happening. But Tawny, though bound, is able to prevent this from happening,.

Tawny manages to free himself and overpower Sivana, but not without losing his outer clothes. he takes the evil scientist back tot eh present, where Sivana eludes him by shouting to the crowd that Tawny is an escaped vicious tiger, causing a panic. Thereafter, Billy returns to the secret Subway and asks Shazam for more information about the Shazamium bracelet.

But it’s not Billy, it’s really Sivana in disguise! So when Shazam lets “Billy” see the bracelet up close, Sivana swipes it, taking its power for himself. Taking Shazam prisoner on the Rick of Eternity, Sivana then appears when Billy attempts to summon the wizard. He taunts Captain Marvel, who can’t lay a finger on him in ethereal form, that Shazam will fade from existence in 24 hours, and that too will signal the end of Captain Marvel.

Outwitted by Sivana, Captain Marvel agrees to serve him in exchange for Shazam’s life. Arriving at the Rock of Eternity, from which Sivana can conquer any time or place in history, Captain Marvel balks at Sivana’s orders, but the wizard tells him that it is written that he must comply. Sivana reveals his own discovery, Sivanium, a living metal that he will use to fashion robot duplicates of himself, an invincible army to take over the universe.

Captain Marvel is put to work on the assembly line fashioning the Sivana robots. Despite the wisdom of Solomon, he sees no way out of this predicament–and becomes to frustrated that he smashes an annoying Sivana robot to bits before realizing that he’s just going to have to rebuild it again. Things look dire for the Universe, for Shazam, and for Cap himself.

Suddenly, Marvel has a brainstorm. He fashions a duplicate of himself out of Sivanium so that the evil scientist won’t realize that he’s taken off. Then he hurries to Earth, where he uses his mighty intellect to create yet another new element, Marvellium, the mightiest element in the universe. It’s so strong that only Captain Marvel can mold it, and he creates an airtight bunker out of the stuff.

Marvel returns to the Rock of Eternity and reverses Sivana’s earlier trick by becoming Billy and disguising himself as a Sivana robot. Then, in disguise, he tells Sivana that Captain Marvel has escaped. Discovering this information to be true, Sivana whisks himself to Station WHIZ on Earth, where Captain Marvel is ready for him. Billy lures Sivana into the Marvellium bunker, through which even his ethereal form cannot pass, and reclaims the Shazamium bracelet, returning to the Rock with only seconds to spare to save Shazam’s existence. And in the interim, the Captain Marvel duplicate has been busy destroying all of the Sivana duplicates, and himself as well.

This is followed by a straightforward Marvel Family tale in which it’s learned that Billy and Mary’s ancestor were responsible for the capture and destruction of a witch in the time of the Salem witch trials. The witch levied a curse on the family line, one which will come due now. Cap Jr. is able to save Billy and Mary from a fiery death and capture the perpetrators, but it’s uncertain whether this is the curse coming true or merely a coincidence.

Finally, the book closes with another great story, “Captain Marvel Battles the World.” The Earth is anthropomorphized in this story, as are the other celestial bodies. But the Earth is sick and tired of having human beings crawling all over it, and sets out to destroy the human race. Marvel foils the strange natural disasters at every turn, And when a runaway comet threatens to collide with the Earth and destroy it, Captain marvel takes care of that menace as well, convincing the Earth that maybe those human beings are all right after all.