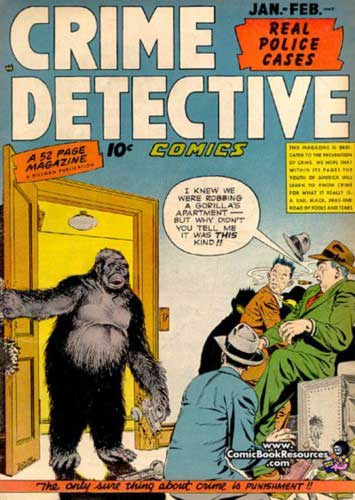 Not to tread on Scott Shaw’s territory, but this issue of CRIME DETECTIVE COMICS features one of the most oddball covers in the history of crime comics–the sole reason I picked it up. Sadly, it’s also an entirely misleading cover, as none of the stories contained herein features a scene even remotely similar to a gorilla bursting in to interrupt a burglary in progress. And it should go without saying that none of those stories even comes close to being as entertaining as the yarns my imagination spun when faced with this cover.

By the late ‘40s, crime comics were becoming big business, and the stands were clogged with all manner of crime titles. In order to stand out, many publishers would opt to put a provocative image on their covers, in the hopes of attracting potential buyers. Sometimes, this strategy could backfire in the long term, though, as it did with me in this case. I’ve never since pursued another issue of this book.

CRIME DETECTIVE was published by Hillman Comics, who are probably best remembered today as the outfit that published AIRBOY.