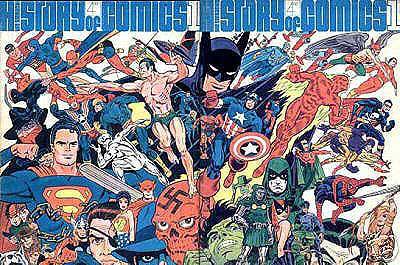 THE STERANKO HISTORY OF COMICS Volume 1
1970

Besides lending its name to these very columns, THE STERANKO HISTORY OF COMICS was one of the earliest and one of the best volumes about the Golden Age of Comics, and the creators who made them. A masterful comics artist himself, Jim Steranko gathered his information firsthand, from long-time cartoonists he sought out and spoke to about the glory days. Six volumes were planned, but only two ever made it to fruition. But they’re indispensable, and were among the earliest books on comics I ever read. (If you can call them books–they were Treasury Edition-sized, and held together by two staples through the spine, just like a big comic book. The covers also had a tendency to crack along the spine and fall off. To date, I’ve owned three copies of Volume 1 because of this.)

That first volume included chapters on the newspaper strips that were the precursors of the comic book, the hero-pulps of the 30s, Superman, Batman, Captain America, the Timely heroes, the All-American/DC heroes, and the kid gangs. Of course, not liking Marvel comics at the point I purchased my copy, I didn’t bother to read the chapters on Cap and the other Timely heroes right away. It was only months later that I finally got around to it–and they were enough (coupled with the stories reprinted in THE GREAT COMIC-BOOK HEROES, which I’d also held off on reading) to get me interested in the Human Torch, and from there the Marvel books in general.

I wish Steranko would reprint these things. Preferably in a more sturdy format

2014 NOTE: I still wish Steranko would reissue these volumes.