An entry from my Marvel blog of days gone by talking about the resiliency of the characters and determining which aspects of them are up for grabs and mutable, and which are inviolate. It’s still a pretty good question.

How Far is Too Far?

How far is too far?

This is a question that we in the storytelling business ask ourselves all the time–especially when it comes to serial storytelling of the sort practiced at Marvel. How far is too far? Are there some stories that should not be told?

I’m not speaking of stories with dicey subject matter–of course a Fantastic Four incest storyline would be unacceptable. No, I’m talking more about the canon of the characters as it pertains to future stories. There are imaginary storytelling boundaries that we erect for ourselves, certain truths that we hold to be self-evident. But are they, really? Or is that simply comfort talking?

I mean, we told the origin of Wolverine, when everybody thought that would ruin the character forevermore–and the sky did not fall. Jean Grey came back from the dead, as did Elektra, as did Norman Osborn, as did Bucky. And the sky, she is still up there. Spider-Man got married. Sky, still blue.

So what are the boundaries? There are story ideas that immediately make my toes curl, and yet I’ve got to constantly analyze why my toes react in this way, and if that reaction is valid. By the same token, there are times when we look in the rear view mirror and realize that we’ve gone too far in one direction or another–could those occasions have been avoided with more or greater self-examination?

And in the end, the characters really only exist to entertain us. So long as they fulfill that function, does it matter if the Human Torch marries Alicia Masters? Or if the Torch isn’t a member, but a cute flying robot is? Or if it’s not a space flight into cosmic rays that gives the team their powers but instead they’re on board a space station? Or experimenting with teleportation? Everybody’s got their own feelings–and I’ve seen creators who are radicals on one story idea being arch-conservatives on another. So who is right?

How far is too far? 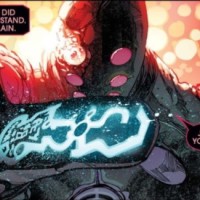