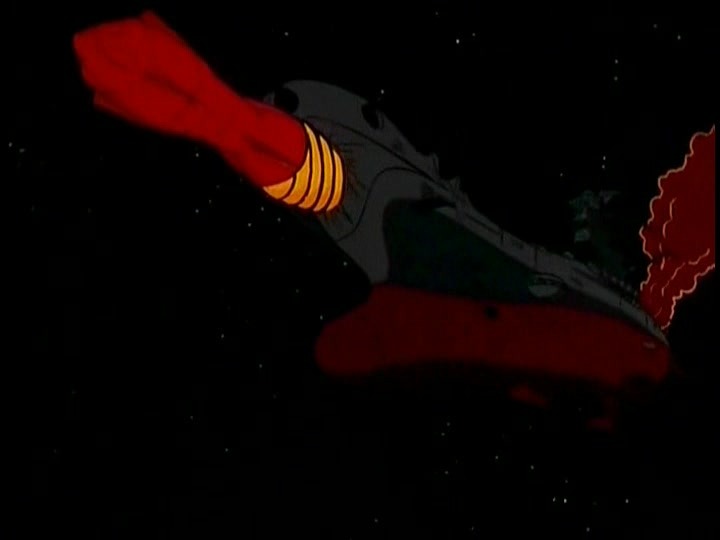 “You are a brave man, Captain. But as you have a mission, so have we. And we consider your presence in the galaxy a threat to our survival. You must return to Earth at once!” – General Lysis

This episode features what is easily the most spectacular and well-choreographed battle sequences in the whole of the series. And in fact, it was an episode that ran both over time and over budget, and it originally aired in Japan with numerous animation errors in evidence, so tight was the delivery schedule. It also was way too long, so in YAMATO, the opening title sequence was eliminated entirely in favor of recap footage to bring the viewers up to speed, and a portion of the end titles had to be eliminated as well. Both of these sequences were excised for STAR BLAZERS, however, which instead chose to dive directly into the action without the standard preamble.

More than any other episode, this particular installment reflects STAR BLAZERS/YAMATO’s influences as being “World War II in outer space.” There isn’t time for a whole lot of characterization here, this is an epic combat film depicting the sort of real-world conflict–carriers vs battleship–that had sent the genuine Yamato to the bottom of the ocean. And in order for this to all work, the animators take some liberties with the science of outer space. The entire episode operates under the principle that there is an up and a down in space.

Despite the fact that there are absolutely no armaments on its underside, the Argo is never truly attacked from below in this story (at least right up until the end.) and the movements of the enemy planes and strike force mirror those of a naval caravan. It’s one of those things that you simply have to accept as a part of the buy-in–the new YAMATO 2199 goes to some crazy lengths to try to justify this in its remake of this episode, and none of it makes the story any more compelling. So, having mentioned it, we’re going to ignore this failing from this point on.

It has to be said that, as compared to the anemic dogfight sequences of the early episodes, the action throughout this installment is quite spectacular. We open with Lysis giving the all clear to his forces to move out, and a fighter squadron from Carrier #1 launches towards the Argo. The Black Tigers, led by Wildstar, launch in response and engage the enemy in a free-form battle.

Lysis takes this moment to play the first of his cards. He assembles the precision bombers from Carrier #2 at the front of his flagship, then uses his S.M.I.T.E. warping equipment to instantly transport them into the space above the Argo, where they can dive-bomb the ship, causing heavy damage everywhere. The Star Force is shaken–they don’t know where those enemy planes came from–and Captain Avatar desperately calls the Black Tigers back to give the ship covering fire.

An agitated Wildstar signals to Conroy and the other fighters that the Argo needs support, and they come flying in like a rescuing cavalry, causing the bombers to regroup and withdraw. But while they’re doing that, Lysis sets up his next shot. He assembles the Torpedo Planes from Carrier #3 and then S.M.I.T.E.s them onto the far side of the Argo away from the Black Tigers. Once warped, the enemy planes swiftly encircle the Argo and bombard it from all sides.

As is usual in STAR BLAZERS episodes, any scenes depicting violence or harm coming to human beings was edited out of the translation, and so there are several tiny cuts being made all throughout this episode. Almost without fail, when we see the Argo being struck by enemy fire, we’ll cut inside to witness bulkheads exploding and nameless crewmembers being engulfed in flames and explosions. Most of these moments are incidental to the episode, so they’re not worth cataloging individually.

At this point, the Black Tigers are running low on fuel and need to return to the Argo for resupply. This leaves the ship without air cover, and is just what Lysis has been waiting for. At his order, a titanic bomber is launched from the Battleship-Carrier carrying his trump card: the Drill Missile. It maneuvers into place in front of Lysis’ command ship, and is instantly transported to the position right in front of the Star Force.

The Star Force sees the enemy ship warp into space right in front of them, but the knowledge wont do them any good. The Drill Missile is fired, and lodges directly within the muzzle of the Wave-Motion Gun itself. There’s a momentary feeling of relief in that the enemy ordinance didn’t blow up, but that relief swiftly disappears as the drill-bit of the missile begins to turn, burrowing deeper into the Argo and destroying the firing gate of the WMG.

Sandor and IQ-9 race down to the Wave-Motion Gun firing room and are able to enter the Drill Missile–for some entirely unbelievable reason, the tip of the missile is open, leading to the interior controls. Once there, the pair attempt to either prevent it from eventually detonating or, failing that, getting it to reverse itself back out of the ship.

Meanwhile, his strategy complete, Lysis decides to indulge in a little bit of hubris, and he orders his fleet to move in closer for the kill. While Sandor is doing his work, repair crews are attempting to replace the Argo’s destroyed radar antennae, so that the Star Force can get a better idea as to the number and location of the enemy forces. But that repair crew is toast, in a scene cut from STAR BLAZERS, as the Gamilon Battleship-Carrier flips over its decks and opens fire on the Star Force.

The Star Force is virtually helpless at this point–most of their guns and weapons are crippled or non-functional, and they can’t mount an effective counter-attack on the Gamilons. Things look bad, and the Gamilon fleet continues to pepper the ship with potshots while they wait for the Drill Missile to explode and finish off their enemy.

But the tide is about to turn. Sandor and IQ-9 have succeeded in rewiring the Drill Missile, and is reverses itself out of the Argo at top speed, flying directly back at the advancing Gamilon fleet. It collides with the Battleship-Carrier and explodes, obliterating the ship, and the succession of explosions wind up taking out the other nearby carriers as well. Only Lysis’ small command ship remains–it is buffeted by the detonations all around it, but it remains intact.

And we now come to the biggest change that STAR BLAZERS made to the source material in this episode. in STAR BLAZERS, with no other option remaining to him, Lysis approaches the Argo from underneath and attaches a bomb to its hull, in a last-ditch attempt to destroy the hated ship. He contacts the Star Force and offers them one final chance to leave the Andromeda Galaxy and return to Earth, after which he detonates his device.

But in YAMATO, there is no device. With no other option, and unwilling or unable to return to Gamilon in disgrace, Lysis attaches his ship to the Argo’s third bridge and then self-destructs in an attempt to eliminate his enemy at the same time. His suicide wasn’t permissible on a children’s cartoon series in the late 1970s, so footage was edited into STAR BLAZERS wound backwards, showing his ship withdrawing from the Argo prior to the explosion, and indicating that he and Volgar survived. His message in YAMATO was one of respect rather than a last ultimatum, as he makes his duty clear: just as the Star Force fights for the future of its home planet, so does he. These shades of grey were sanded down in STAR BLAZERS.

In the aftermath of the explosion, the Argo is still intact, though the Third Bridge and most of the lower deck has been destroyed–don’t worry, everything will (somehow) be repaired again by the next episode. Though STAR BLAZERS truncates it pretty severely, it does run a bit of the funeral that is thereafter held for those crewmen who lost their lives in the battle, as their bodies are released into the void of space. You can hear the sound effect of the 21 Gun Salute on the soundtrack even though that image is one of the ones that was edited out of STAR BLAZERS.

Because it ran over its run time, this is the only episode of STAR BLAZERS during the midst of the Iscandar sequence not to end on the countdown to extinction. Rather, the narrator simply intones, “The Star Force will continue on! It must go on! Earth is still in danger!” Records show that the intended countdown count on this episode would have been 214 days remaining, but even YAMATO didn’t have space for it in this overlong episode.