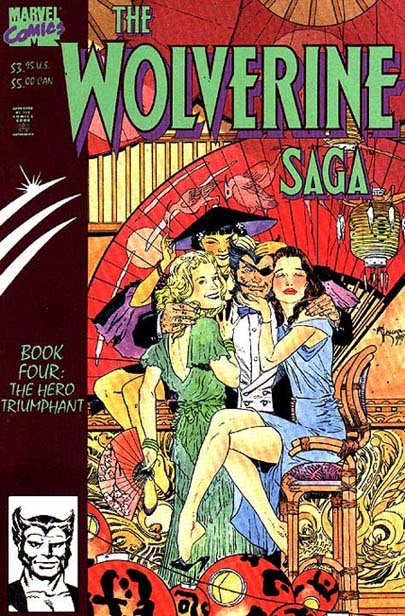 WOLVERINE SAGA #4 contains my first published credit, although it doesn’t really say in what capacity I was being credited.

WOLVERINE SAGA was an overpriced, bookshelf-format life’s story of Wolverine, published at a time when pretty much everything starring the X-Men sold tremendously well. It was well researched and written by Peter Sanderson, and the art was culled from various printed comics that Wolverine had appeared in. That’s where I came in.

As part of my internship duties at Marvel during the summer of 1989, it fell to me to go through the mountain of proof rolls (black-and-white stats of entire comic books preserved for archival purposes), locate the images that Peter had called for, and then get them shot for inclusion in this book. It was time-consuming though not back-breaking work.

Designer Cindy Emmert, feeling that I had done more work on the four issues of WOLVERINE SAGA than either the editor or the assistant editor, decided to sneak in a credit for me. And the editor in question either never noticed it was there, or didn’t particularly mind its inclusion.

Surely that’s worth $3.95 of your hard-earned money…