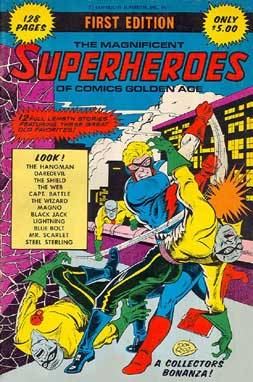 The ad for MAGNIFICENT SUPERHEROES and its companion volume, THE GOLDEN AGE REVIEW, ran in Marvel books sometime in 1978. I ordered both of them from SUPERHERO MERCHANDISE not long afterward.

These were comic book-sized black-and-white reprints of various golden age superhero stories obviously shot from the original comics. Nevertheless, they were a nice “Whitman Sampler” of the sort of material that had been published back in the early 40s. Most of the stories came from books put out by three publishers; Fawcett (best known for the original Captain Marvel), MLJ (currently Archie), and Lev Gleason (best remembered for the gritty CRIME DOES NOT PAY). They were all somewhat crude by today’s standards, but they had a certain vigorous charm that overcame the deficiencies in the writing and the art.