As we’ve spoken about in the past, the establishment of the Direct Sales comic book marketplace provided an opportunity for new publishers to enter the field. Initially, the efforts expended in this new arena tended to be attempting to push the boundaries of what comic books could be in different directions, outside of the oversight of the Comics Code. But as time went on and it became apparent what sorts of series performed well in this new marketplace, the emphasis shifted over more towards creators wanting to do their own super hero titles. Often, these books had some aspirations beyond the output of a Marvel or a DC–but they were cut very much from the same mold. This was often fans with some talent realizing that there was a barn and attempting to put on a show.

One of the earliest of these, and one that would go on to have a surprisingly long track record over the next decade-and-a-half, came out of Detroit, published initially by a consortium of fans and would-be professionals who adopted the company name Noble. This was JUSTICE MACHINE, the brainchild of Mike Gustovich. Gustovich had been operating around the edges of the “ground level” comic book movement for some time–his COBALT BLUE was published as part of the short-lived POWER COMICS imprint a couple of years earlier.

JUSTICE MACHINE concerns the adventures of a so-named super hero team from the aptly-named parallel world of Georwell. There, they are law enforcement operatives, albeit ones unknowingly working in the service of a totalitarian government. Their greatest enemy is Maxinor, a terrorist leader who is attempting to topple the government and replace it with his own regime. As this inaugural issue opens, the Justice Machine is in pitched battle with their elusive foe, who manages to make his escape across the dimensional divide to the parallel world of Earth. Despite the reluctance of their overseers, the Justice Machine chooses to pursue Maxinor to Earth in order to apprehend him and bring him back to face justice for his offenses.

But this proves easier said than done, as when the Justice Machine makes the journey to 20th Century Manhattan, they begin to get their first taste of how the other half lives, and it begins to dawn upon them that they have been fighting on behalf of a leadership that oppresses free thought, and aren’t really the good guys they had thought they were. This revelation is aided by the fact that they are hunted and branded traitors by that selfsame leadership just as soon as they cross the dimensional divide. Cut off from their own homeworld, the chastised and blinders-off Justice Machine suddenly needs to find its place in this new world.

JUSTICE MACHINE was a pretty heady mix of high-minded themes and super hero action, marred only by the inexperience of its creators. The whole thing is a bit too simplistically laid out to truly embody the themes that the creators were attempting to tackle. But there was definitely some ambition at play. The initial three issues of the series were produced in a larger magazine format, and used an imprecise color separation process for its final art. That and the lack of polish among Gustovich and his assorted inkers meant that the artwork was a bit inconsistent. The one contributor to JUSTICE MACHINE besides Gustovich himself to go on to better things was Bill Messner-Loebs, who provided an inking assist on this initial issue and who would occasionally be called upon to script subsequent issues.

Wisely, Gustovich and the Noble crew wrapped their package in covers that were slicked up thanks to the contributions of more experienced and professional hands. Memorably, this first issue sported a cover by John Byrne, who was just segueing from UNCANNY X-MEN to FANTASTIC FOUR when this book came out. A better front-face for a new super hero release you could not have found in 1981–I get the sense that Byrne did the cover as a commission at some convention, but I’m not certain of any of the details. (It was reused years later as the cover to a release during one of the later JUSTICE MACHINE revivals, presumably without any additional payment to Byrne–a good investment on Gustovich’s part.) Subsequent issues would have Gustovich’s covers inked by the likes of Terry Austin and Joe Rubinstein, giving them a more polished look.

With the fourth issue, JUSTICE MACHINE switched over to being released at the traditional comic book dimensions–it’s interesting how many of the new publishers of this era attempted to establish a toe-hold with the magazine format, only to discover that the marketplace wanted a uniform product. This occurred time and time again. Unfortunately for Noble, publishing a comic book while also writing and drawing the thing (and presumably holding down day jobs in the meantime) was a lot of work, and after five issues they gave up the ghost. Fortune seemed to smile, however, when a new outfit, Texas Comics, offered to continue as the JUSTICE MACHINE’s publisher of record. But they only managed a single release before getting out of the game themselves, the first JUSTICE MACHINE ANNUAL, which was noteworthy both for the fact that the T.H.U.N.D.E.R. AGENTS guest-starred in the lead story, and Bill Willingham’s popular ELEMENTALS made its comic book debut in the back. And it was actually this happenstance that indirectly led to JUSTICE MACHINE’s return.

Bill Willingham was able to place his ELEMENTALS series with Comico following Texas’s shutdown, and it rapidly became a hit for them–the first Comico ELEMENTALS issue was briefly a high-ticket item in that it flew below a lot of fans’ radar. This led to Comico wanting other ELEMENTALS projects and also any similar properties–and the connection to the Justice Machine had previously been established, albeit only in publishing terms. Thus, the team was reintroduced to the world in Comico’s JUSTICE MACHINE FEATURING THE ELEMENTALS limited series, which rebooted the continuity of the team back to zero to start things clean for the book’s new audience (a fate that would befall the Justice Machine often in its history–to the point where one almost wishes that somebody made that into a feature of the series, rather than a bug.)

Following the success of that limited series, Comico launched an ongoing JUSTICE MACHINE title, which ran for 29 issues during the 1980s. Tony Isabella came on board as the writer for the initial portion of this run, and his period at the helm is likely the one best remembered by fans of the strip all these years later. Comico, though, made a few disastrous business decisions heading into the new decade and were forced to shutter operations, leaving all of their properties in limbo.

But somehow, JUSTICE MACHINE simply refused to die, and the next two decades saw a number of round-robin attempts to relaunch the characters again by a variety of different publishing entities. Innovation Comics and Millennium Publications both took a turn, with little success, and in the 200s there were at least two half-hearted attempts to pick up on storylines that had been set up during those earlier ventures. At some point, creator Mike Gustovich had sold away his ownership stake in JUSTICE MACHINE (much as Bill Willingham had done with ELEMENTALS) so over time, the concept drifted further and further away from his initial conception, both visually and conceptually.

For me, though, this first incarnation of the Justice Machine is the one that speaks to me. I was at just the right point in my development as a comic book reader to be thoroughly enchanted by this new super hero series when I came across the first issue on one of my regular shopping trips to PORT COMICS in Medford. I had always been fascinated by non-bit-two super heroes, and JUSTICE MACHINE fit the bill, while also seeming familiar enough in its conventions that it gave me the kind of super hero hit that I was looking for. (I can remember being just a bit put off by the title–“Justice” was so strongly associated with DC through the Justice League and the Justice Society that I wondered whether it was even legal to put out a book called JUSTICE MACHINE. I felt similarly about the team having a character called Demon.)

The Justice Machine were also the subject of a Table Top RPG gaming sourcebook early on–a few of the initial contributors to the title, notably Kevin Siembieda, were involved in the RPG scene at the time. This sourcebook was based on the initial Mike Gustovich version of the series, and included a wide swath of detail that never made its way into the pages of the comics before that initial run shut down. 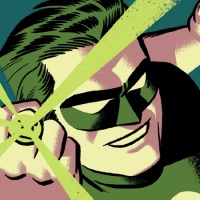