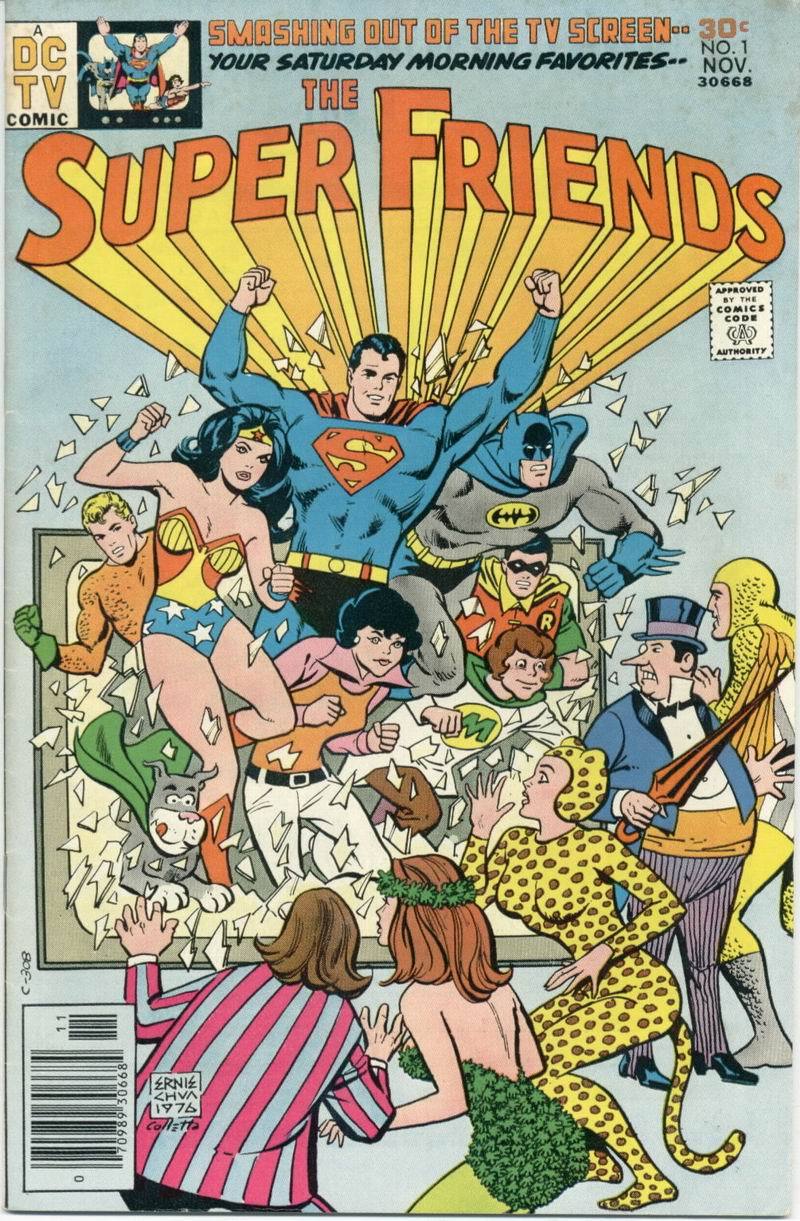 The cartoon had been airing on Saturday mornings for about three years at this point, constantly rerunning the same 16 episodes again and again, but in 1976 DC finally got around to doing a comic book tie-in. And because of the characters it featured, I bought the first issue. I was a regular viewer of the cartoon, especially happy whenever the episode guest-starring The Flash would turn up in the rotation. But even at nine years old, I already viewed it a bit as “kiddie stuff”, especially as compared to the comic books it was based on. So it was with a little bit of embarrassment on my part that I sampled the comic book, Vinnie Colletta’s hasty inks on Ernie Chua/Chan’s cover not helping things in the slightest.

Things didn’t get much better art-wise on the interior. It’s obvious that the team was trying to mimic the open look of an animated cartoon, but as compared to the other titles starring Superman and company, this stuff just looked crude and coloring book-y to my young eyes. At different points, SUPER FRIENDS was a pretty good comic book, better than the contemporary JUSTICE LEAGUE title in many folks’ opinions. But I just could never get past this approach to embrace it whole-heartedly. I felt like I was slumming somehow simply by reading it–a phenomenon that continues to this day among fans and certain titles.

A lot of the reason for the success of the series has to go to writer E. Nelson Bridwell. Nelson was DC’s unofficial historian, with a love of DC’s past and an encyclopedian working knowledge of the stories of days ago. All of which he brought to bear on this new assignment. The issue opens in the Hall of Justice, where Robin is giving trapeze lessons to the junior Super Friends Wendy and Marvin. Elsewhere, we see that five super-villains have adopted their own young proteges and are training them in villainy so as to battle the Super Friends. Along with more familiar faces, Bridwell includes the more obscure Flying Fish among the bad guys.

The villains are after the components of Project SR, an attempt to create a super-powerful robot weapon. Splitting up in response to the Troubalert, the Super Friends race to combat their foes. Supeman and Robin join forces to take on Toyman and Poison Ivy at Robin’s college Hudson University, but their efforts are stymied by Toyboy and Honeysuckle and the villains get away empty handed.

Aquaman is similarly stymied by Sardine when he intercedes in the Flying Fish’s attempt to swipe the robot’s super-metal from a laboratory in Atlantis. And Wonder Woman and Batman journey to the Eagle’s Nest, a mountaintop laboratory where they battle Penguin and Cheetah and are countered by Kitten and Chick. But they’ve brought Wendy, Marvin and Wonder Dog along with them, and the kids tackle the villains’ proteges when they try to make a run for it.

Good-hearted, Wendy and Marvin take the two junior Super-Villains back to the Hall of Justice hoping that seeing how the other half lives will get them to roll on their sinister role models. Bridwell uses this opportunity to specify that the Hall isn’t the headquarters of the JLA–that’s still the Satellite–but it’s rather a place where young crimefighters are to be trained. Unfortunately, that won’t include Chick and Kitten, who radio back to the Penguin that everything is going according to plan. Wonder sees Chick place the call, but being a dog, he can’t speak and warn the kids. And that’s where the issue leaves off.

Bridwell also writes the issue’s text page, where he speaks about the development of the series, both the cartoon and now this adaptation. He reminds readers that he wrote the short story in the SUPER FRIENDS treasury Edition a year or two earlier, and that makes me think that perhaps that Treasury sold well enough to encourage DC to do this book as a follow-up. Nelson also digs deep into DC history to create connections between Wendy and Marvin and the heroes who mentor them, notably Batman and Wonder Woman, and gives them what would become their canonical last names, Wendy Harris and Marvin White.