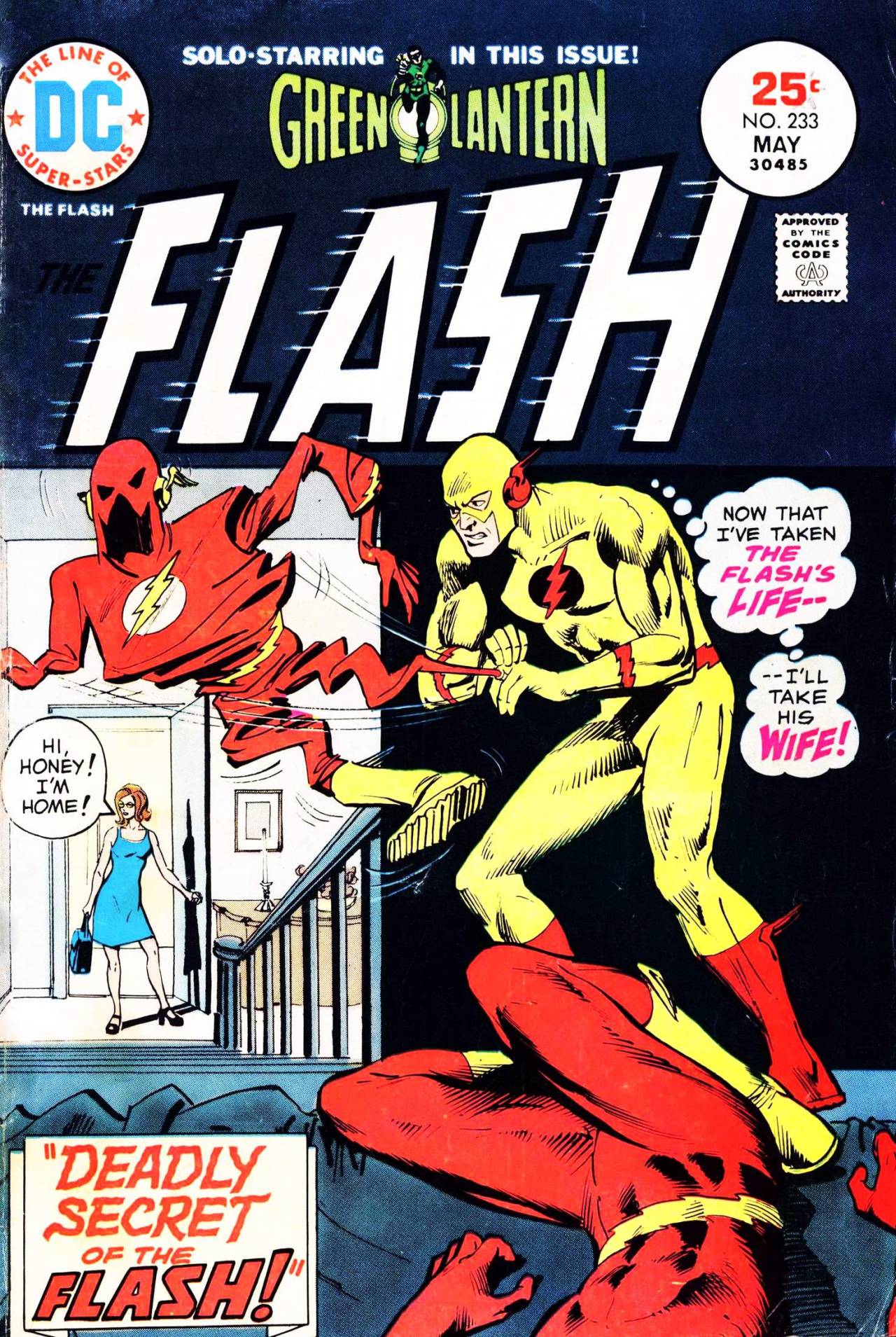 The mailman brought me another folded-in-half issue of THE FLASH, which was always a fun and unexpected surprise, as I wasn’t yet conscious of how often a new issue would be appearing (and this was with most DC books listing the approximate publication date of the next issue on their final page.) Despite featuring the Reverse-Flash, a real favorite of mine, I found the issue underwhelming. For one thing, this cover bothered me for the stupidest of reasons: Iris Allen is wearing glasses. Didn’t DC know its own characters? Didn’t they care? My comic book reader’s sense of right and wrong were definitely tweaked by this harmless oversight by artist Dick Giordano.

Also unfortunate, the cover gives away the big twist of the story ahead of time, as Professor Zoom takes the place of his rival Barry Allen, and only Iris Allen is able to discern the difference. Any question about what is going on in this story is pretty well nullified by the cover. This was an occasional hazard of comics in those days, where the instinct to sell the magazine was more important than maintaining the reading experience of the story within.

The story opens with the Allens driving their new boarder Stacy Conwell to a dental appointment. Along the way, a radio bulletin tells of several rogue tornadoes heading towards the city. Just then, the Allens come across a body lying in the road, and Barry exits to await the paramedics. This is a ruse, of course–the body is a dummy, and Barry is going to become the Flash and investigate those rogue tornadoes.

Turns out those tornadoes aren’t a naturally-occurring phenomenon, but are actually a trap by the Reverse-Flash for his swift foe. The tornadoes are infused with deadly Cosma-Spurs, technology from the 25th Century, which bombard the Flash and reduce him to an empty uniform.

But no need to worry–Barry has escaped, and he returns to Iris to let her know. His strategy is to lie low, letting Zoom think him dead, until the Professor makes his next move and he can nab him. As the day goes on, Barry is his traditionally late self, missing appointments with Iris, who is vexed–she changed the setting on Barry’s watch, moving the displayed time ahead so that he’d still be early even when he was late. Alas, this small act of spousal deceit reveals the truth: the man standing with Iris isn’t her husband, but is in reality the Reverse-Flash.

Crazy stalker that he is, Zoom is obsessed with Iris and intended to take Barry’s place as her beau. But now, of course, he has no choice but to kill her, intending to chop her to pieces with a ruler spun at super-speed. But before he can do so, he’s struck down and laid out by an invisible force: it’s the real Barry Allen, who had been stuck vibrating at super-speed since escaping the Cosma-Spurs, but who was able to marshal his focus to slow down and become corporeal because of the threat to Iris. And then everything is wrapped up neatly–hey, what do you want for a story that’s only 11 pages long?

Next came this super-exciting ad spread. It wasn’t exciting due to Joe Kubert’s beautiful adaptation of the Bible, of course, but rather for the announcement that the next Famous 1st Edition treasury would feature ALL-STAR COMICS #3, the first meeting of the Justice Society of America. I think i was probably more excited by this ad than anything else in this particular issue of FLASH.

Thereafter came the letters page, which included the Statement of Ownership, a postal regulations necessity. According to the information therein, FLASH was selling on average 184,749 copies an issue, on a print run of 352,751. So a 52% sell-through, which meant the book was healthy but not a huge success–a midlist title.

Meanwhile, in the back-up story, Green Lantern began a two-part adventure that saw him waylaid to a strange plane that resembled World War II, where he aided the crew of an abducted Sherman Tank in combating an alien force in a similar armored vehicle.

It’s all the work of a pair of ratlike aliens, who love to bet on contests between different species–a Vegased-up version of The Arena from STAR TREK–and who kicked one another in lieu of shaking hands. By the end of the first round, Green Lantern had been felled by an atmosphere that was a soporific to him, and the earth tank and the alien Sposm vehicle are ready to begin round two–the atmosphere somehow not putting the crew of the tank to sleep like it did GL. To be continued…