Not only did UNTOLD TALES OF SPIDER-MAN #-1 feature a story illustrated by John Romita Sr., not only did it include a back-up tale by Fred Hembeck, but I was even able to get a Hembeck cover on the thing, at least for a portion of the run.

The FLASHBACK event was the brainchild of Scott Lobdell, the concept being that, for one month, all of the series in the Marvel Universe would tell stories of their characters set before FANTASTIC FOUR #1–before the characters had gained their powers. Since UNTOLD TALES was already set in the past, we opted to go back further than most, with a story about Peter Parker’s parents when they worked as spies (with the earliest possible appearance of Pete), and the first new Li’l Petey story by Hembeck in years.

I believe it was Another Universe that cut a deal with Marvel to have a few alternate covers on a batch of the FLASHBACKS books. Most people just cobbled together something out of interior artwork, but I took the opportunity to commission a new cover from Fred–only the second time, I believe, that his artwork appeared on the cover of a regular Marvel comic 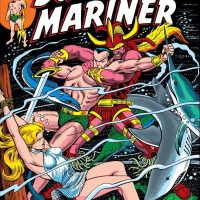