It was always a welcome moment when a new issue of MARVEL’S GREATEST COMICS turned up at my local 7-11. FANTASTIC FOUR was my favorite comic book at the time, and getting an issue of MGC, which reprinted older issues of FANTASTIC FOUR, was virtually as good as getting a new issue. The big change in cover approach at the time when this cover was first put together in late 1969 was the strong pivot back to cover copy and word balloons on covers. After many, many years without, somebody–one assumes editor Stan Lee, but it may have been publisher Martin Goodman–tilted suddenly and heavily back into including them. Here, I don’t know that they add all that much, though they can be used effectively and were much of the time. On this MGC reprint, somebody must have felt that Jack Kirby’s Thing face was too stylized or something, as he’s been given a new head for this reprint, one which looks more like his cuddlier 1970s self. I can’t say that I think it’s an improvement.

This was a weird issue when it was first published in 1969, and it was even weirder to read in 1978. At this time, the long partnership between Stan Lee and Jack Kirby was effectively over, they just didn’t entirely realize it at the time. Between that and a mandate to produce only single-issue stories, FANTASTIC FOUR had become an anemic reflection of what it had been before. There was often nice artwork, strong graphics. But the plots were thin and too casually wrapped up, and the entire enterprise was in full-on neutral. This is one of the main reasons why the book’s sales picked up after Kirby’s departure: the return of multi-part stories and a sense of excitement is just what readers had been longing for during the final year of Kirby’s tenure. On the other hand, the artwork had snapped back to looking crisp, thanks to the return of inker Joe Sinnott, who had been absent for most of the recent issues. Frank Giacoia, who had subbed in, was a good, faithful Kirby inker, but he didn’t provide the strip with the requisite slickness and polish. With Joe back in the chair, the Fantastic Four once more looked the way they ought to.

It’s debatable who provided the plot for this issue. At the time, Kirby was demanding that Lee provide him with written plots and refusing to do most of the plotting himself (at least verbally; in practice, he wound up controlling the pacing and the manner in which each story unfolded.) But it revolves around the first moon landing, an event that took place a year before at the time the story was crafted, and a full decade previous when this reprint was released. The moon landing was a huge cultural event, and so it’s natural that Marvel would want to incorporate it into the Marvel Universe (this despite the fact that the Fantastic Four had first been to the moon in 1963, and routinely journeyed outside of our galaxy. This was a dichotomy that readers were expected to simply ignore.) But doing the story a year later feels out of step. I can understand not wanting to do it before the event happened, or during–you never know what might have gone wrong, after all. But a year later feels a little bit like somebody who missed a party trying to insist that yes, they had been there and played a very important role, too!

ADDITION: A few people have pointed out that the moon landing took place in July of 1969 and this story first saw print in February of 1970, which means that it must have been started almost immediately after the successful completion of the moon mission.

The story opens flashing back to July 1968, on the eve of the Apollo moon launch. Reed Richards is concerned as he’s picked up some coded messages beamed from the Kree galaxy earthward. Decoding them, they indicate that the Kree are concerned about humanity making this first step into space and towards the Kree’s back yard, and so they are maneuvering to prevent the successful completion of the mission. In order to make sure the astronauts reach the lunar surface safely, Reed, Ben and Johnny (Sue stays home to look after little Franklin, as she often did during this time) jet out to a strange island that has risen in the ocean, activated by a robotic Kree Sentry like the one they had tangled with earlier. The place looks like the surface of the moon, and it contains the gear that the Sentry is going to use to zorch the moon mission before the lunar capsule can make touchdown at Tranquility

Of course, in order to destroy the doomsday device aimed at the astronauts, the FF trio is first going to have to battle their way past the unstoppable Kree Sentry. And so, a typical Marvel fight breaks out. But it’s a relatively short battle–Kirby simply doesn’t have the pages available to him to really go to town on it as he might have in the past, given the need to fit the entire adventure into this one issue. And so, after a bit of dancing, the Thing clobbers the Sentry, putting him down for good. Leaving Ben behind to safeguard their fallen foe, Reed and the Torch descend into the inside of the island base, searching for the dingus that will doom the moon mission.

And find it they do! But the device itself isn’t helpless–it contains defensive measures, one of which is to send out rays that deaden the will of all who approach it. Try as they might, neither the Torch nor Mister Fantastic can quite reach the device to destroy it or turn it off. The tension mounts as the lunar lander approaches the surface of the moon. Out of other options, Reed calls for Ben’s assistance, despite the fact that the Thing must be at least a half-mile away on the surface of the island. But wouldn’t you know it? He arrives in a single panel, just in time to destroy the weapon before it can unleash on the astronauts. (Stan attempts to cover Ben’s sudden appearance by having him remark in another page that he’d gotten bored nursemaiding the Sentry and came after Reed and Johnny–so he wasn’t so far away that he wouldn’t have heard Reed’s cries for help.)

The destruction of the gizmo sends the entire island into self-destruct mode, and so Ben, with Reed under one arm and Johnny under the other, has to sprint for their Pogo Plane in order to escape the holocaust all around him. (Unfortunately, Stan had added a line in earlier about how the plane was just about out of fuel when it landed, meaning that it couldn’t have lifted off again here. Oops.) But the day is saved. The FF watch the Sentry fly off, his mission having ended in failure. And high up in the sky, the story closes out with astronaut Neil Armstrong taking mankind’s first step onto the surface of the moon. So it’s a perfectly fine twenty minutes of entertainment, but the story feels cramped and thin, both Kirby and Lee are forced to shortcut their way past certain events in order to fit everything in, and it’s clear that neither man is paying 100% attention to what he is doing. This, sadly, was the way of FANTASTIC FOUR during Kirby’s last days on the title. You’d see him explode with ideas once again after he left Marvel for DC and began his Fourth World epic. 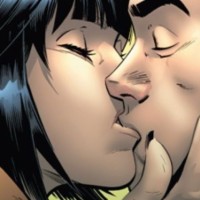