Now that I was able to go to my local 7-11 whenever I wanted to, I did spend a week during this summer working out something very important: when did the new comic books show up every week? I went to that 7-11 day in and day out until I was certain that my analysis was the correct one. And it was–new comics showed up every Thursday like clockwork. from that point on, the 7-11 became a destination spot every Thursday, and that’s when I would have picked up this issue of ACTION COMICS.

I honestly remember very little about this issue of ACTION, outside of its relatively ludicrous cover image of Superman expanding like a beach ball. It was another in a string of issues under editor Julie Schwartz’s oversight that was a perfectly fine and entertaining adventure, but one that didn’t really make all that much of an impact once the story was done. Comfortable is the word I would use to describe it.

The issue opens with Superman returning from a mission in space to find a huge hurricane squall covering a tremendous portion of the Earth. He’s got to get back to Metropolis in time for his six o’clock news broadcast as Clark Kent, but he does have the time to save fellow journalist Steve Lombard when the sportscaster’s blimp is struck by lightning during the storm. As he does so, alien eyes watch him, and comment that he’s the only fascinating human being they’ve beheld in the thousand or so years they have watched the human race. Ominous.

Clark begins his broadcast, then cuts to Lois Lane at the site of New York’s Empire Dam, which is already straining to contain all of the excess precipitation. The dam fails, and Clark rushes out of the broadcast studio to change to Superman and fly to the rescue. He’s able to save Lois (and countless other New Yorkers, presumably, but he doesn’t seem all that interested in that) and then has to evacuate them further as a seeming earthquake rocks New York. Cracks are forming in the Earth’s crust. It’s being caused by a huge quasi-tornado extending up to the edge of space.

Superman understands the scale of the danger he’s facing, so he sends out the Justice League alert signal, but no other hero responds to his summons. So he proceeds alone, and is attacked by a pair of aliens safeguarding the equipment causing the colossal vortex. As on the cover, they use a neutrino blast which causes Superman’s sub-molecular density to expand, causing him to inflate like a balloon and then suddenly contract, rendering him insensate. The bad guys scoop him up and take him to their waiting spaceship.

As the ship takes off, we cut to elsewere on Earth–Central City in fact, where police scientist Barry Allen is wondering about the whereabouts of the Flash in this time of crisis–not realizing that he himself is the Flash. Whoever the aliens are, they’ve erased the memories of Earth’s other heroes. Out in space, the alien ship approaches the moon and enters into it through a crater, revealing a wondrous civilization within it. Superman is brought before the Diode, the ruler of the civilization of Luna, who had watched him earlier–and who tells the Man of Steel that Luna is the original planet and Earth is the satellite, and that her civilization now needs to overtake Earth if they are to expand and survive. So they intend to absorb the Earth. To Be Continued!

There’s a back-up story in this issue of ACTION COMICS as well, a decidedly-not-action-oriented tale from the Private Life of Clark Kent concerning his zealous fan club. They’re led by the daughter of one of Galaxy Communications’ biggest shareholders and they want a tour from Clark. When a fire breaks out in the film room, Clark can’t seem to duck them to change to Superman (and it apparently doesn’t occur to him to pull the fire alarm or anything.) Eventually, he needs to do the old Flash trick where he moves so fast that both Clark and Superman appear to be in the same place at the same time. 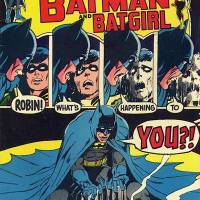 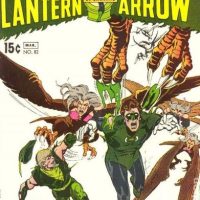 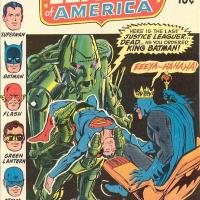 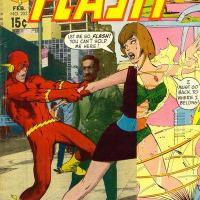