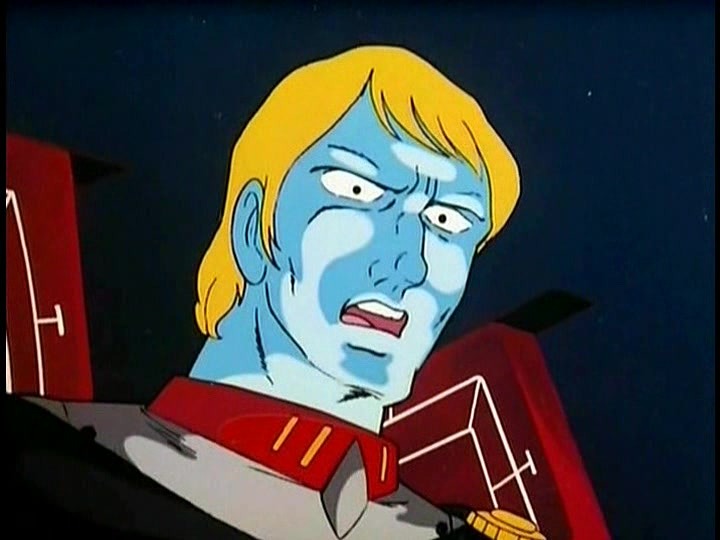 “Leader Desslok, we must stop fooling ourselves. You said it yourself. It’s almost as if we’ve been fighting a ghost ship. How can an old Earth battleship defeat all of Gamilon? We’ve been fighting a force we don’t understand, let us stop fighting them before they destroy us!” – General Krypt

This is another of the all-time classic STAR BLAZERS episodes, one that works on almost every level, that looks good, and that advances the story significantly. And amazingly, it still functions despite the fact that STAR BLAZERS cuts the key sequence and monologue that defines the theme of YAMATO and the entire source material series.

After the standard boiler plate series recap, we pick up with the Argo lifting off our of the sulfuric acid sea on Gamilon, once again leaving its Third bridge behind. For whatever reason, everybody in STAR BLAZERS this episode refers to it instead as the Third Gun Deck–but the situation is crystal clear no matter how you slice it: the environment on Gamilon is rapidly eating away at the hull of the Star Force’s ship, dissolving it. And the enemy barrage is keeping the ship pinned down within the heart of the artificially-stirred weather. They are in trouble.

One person who’s not in trouble is Gamilon Leader Desslok, but that’s not keeping him from getting his temper up as his forces are unable to finish off the Earth ship: “We’ve got the Star Force right here on Gamilon, and you bumbling idiots still can’t destroy it!” Desslok has his Generals increase power to their weather-control devices, expanding the size and the intensity of the storm surrounding the Star Force. But when toadying General Krypt brings him a drink to toast the great Leader’s victory, Desslok knocks it all over him in a rage. He’s a hard man to work for.

Meanwhile, the Argo is taking a pounding from all sides, and Deputy Captain Derek Wildstar doesn’t any idea what to do next. At Nova’s suggestion, he goes topside to see the bedridden Captain Avatar in the old man’s quarters at the top of the ship, in the hopes that Avatar will see a way out of the trap they’re in. Wildstar confesses, “I don’t know what to do in a situation like this.” And of course, Avatar has the answer.

“Well, there’s only one thing you can do: submerge the ship! Our hull is strong enough to withstand the acid for at least ten minutes. As soon as you submerge, locate one of the underseas volcanoes. All volcanoes have a tremendous destructive energy. The ones on Gamilon are very powerful and active. We can trigger them to greater activity with the Wave-Motion Gun. Aim at the base of the volcanoes so as to release the most energy! The eruption of the volcanoes should stop the Gamilon attack. But remember: we can’t stay submerged long!“

Back on the bridge, Sandor is skeptical about this plan: “That acid will dissolve the ship! You saw what it did to the third gun deck!” When Wildstar asks him whether the hatches have been closed near the damaged section, he continues, “The ship is water-tight–maybe I should say acid-tight–at least until the acid eats through the hull!” Sandor will spend the next ten minutes frantically checking his watch and urging the Star Force to work faster.

As the Argo submerges, Wildstar has IQ-9 scan for a nearby volcano range. This takes a few minutes to accomplish, which drives Sandor apoplectic as bits begin to fall away from the Argo, until IQ is able to confirm their nearby target: “Dead ahead is a large submerged volcano with connecting passages to several others, all large. Total eruptive power went off my meter!” Now you’re talking, IQ! With no time to spare (and no need to don protective eyewear as the bridge’s safety shutters are closed to protect it from the acid) the Wave-Motion Gun is expertly charged up and fired.

And all hell breaks loose! As the beam from the Wave-Motion Gun strikes home, total Armageddon spreads across the sea bed of Gamilon as, one by one, the unstable volcanoes detonate, causing massive earthquakes as well as for the seas to rise up over their beds, their acidic liquids intermixing with the free-flowing lava that completely obliterates the remaining cities of Gamilon. Ceiling-mounted armaments fall into this conflagration, causing a succession of greater explosions. It’s pretty easy to tell that any life left on the surface of Gamilon a few moments ago simply isn’t there any longer.

Watching these events unfold from his ceiling-mounted palace flagship, Leader Desslok completely cracks, laughing maniacally as his High Command, in complete disarray, looks for his guidance as to what they should do next. Half-cackling, half-crying, the completely bananas Gamilon dictator can only mutter, “The Star Force! HaHaHaHaHa! And we forced them to come here! And we dragged them here! HaHaHaHaHa!“

After the commercial break, the stirring YAMATO theme music begins to sound, and the Argo rises up out of the acid sea and into the skies of the chaotic Gamilon. Leader Desslok has thoroughly lost his grip, intent on emptying the Empire’s arsenals in order to bring down the hated ship that has caused so much destruction to his homeland. But here, it is General Krypt who is the voice of reason. He comes the closest that anybody in STAR BLAZERS ever does to articulating one of the unspoken premises of YAMATO; that the YAMATO is more than merely a ship, that it rather embodies the dreams and the drives of the people of Japan (and by extension, the people of Earth) and that there is as much supernatural as super-scientific about the way it is able to overcome greater numbers and greater adversity. Krypt begs his beloved Leader to stand down in the face of such an overwhelming power.

STAR BLAZERS cuts Desslok’s reply (though they do hold on Krypt’s manic pull-in long enough that the moment when life leaves his body is clearly there), but he coldly pulls out his sidearm and executes his loyal General. He can be a hard man to work for, indeed, (In STAR BLAZERS, an earlier bit of footage is dropped in, with Desslok calmly telling Krypt that he doesn’t want to hear such defeatist talk. This, shall we say, lacks punch.)

What follows for the Star Force is a wild, spectacular battle sequence in which the ship is besieged by waves of enemy missiles from all angles, and it desperately fights to stay alive, delivering catastrophic damage to the enemy. At a certain point, with crewmen falling aside due to injury (though this is heavily edited in STAR BLAZERS) Wildstar even makes his way down to one of the gun turrets, so that he can help fire the thing by hand.

Desslok’s palace flagship is hit and begins to fall from the ceiling. We see him stagger to his feet among other fallen (presumably dead) Gamilon soldiers, only to have the roof cave in painfully atop him. Here, STAR BLAZERS once again edits in footage from elsewhere, in this instance from two episodes later, where it was revealed that Desslok escaped being crushed to death by slipping through a trap door in the floor–good thing the Leader had those installed to get rid of people who laughed at their own jokes, eh?

The picture goes to black and there is a second of silence, and then we begin to fade back in on the aftermath of the battle as Wildstar recovers his senses. STAR BLAZERS attempts to minimize the seriousness of the moment to say nothing of the bodies that are strewn everywhere in these shots by adding in some chatter over the top of it all from Sandor and Eager. but Wildstar staggers out of the half-destroyed gun emplacement to find Nova weeping on the deck of the Argo. And it’s here that STAR BLAZERS makes a crucial cut–because in the American version, Nova is crying because of all the fighting they’ve had to do, and Wildstar is relieved that the Gamilons have finally stopped. And that’s not what this scene is about at all.

In YAMATO, it’s a much longer piece, and the central thesis of the entire show. For Wildstar and Nova both are confronted with the fact that, in trying to save their own planet and people, they have inadvertently committed genocide against another race, the Gamilons. Nova literally wonders how she will be able to face God when her time comes with so much blood on her hands, and Wildstar picks up a discarded rifle, smashing it to the deck at his feet in a renouncement of the ways of violence that have defined him for much of this journey.

With nothing more that can be done, the Star Force lifts off from Gamilon and heads for its twin planet, the long-sought-after Iscandar, where the hope of all mankind rests. There’s a very beautiful, very simple shot in this sequence in which the Argo and Iscandar in the sky remain stationary, but the curvature of Gamilon is slid away between them, giving the impression of the ship cresting the planet to see their goal hanging there in front of them.

Captain Avatar gets the last word, taking to the ships intercom: “Star Force, this is your Captain. My congratulations to you all. There is Iscandar before us. I know you often wondered if you would ever see it. You were all brave enough to go on anyway. I can thank you for myself, for being the best crew I’ve ever know, but when the mission is completed, and you are back on Earth, you will have the thanks of the world!” But that needs to happen in the 161 days remaining!