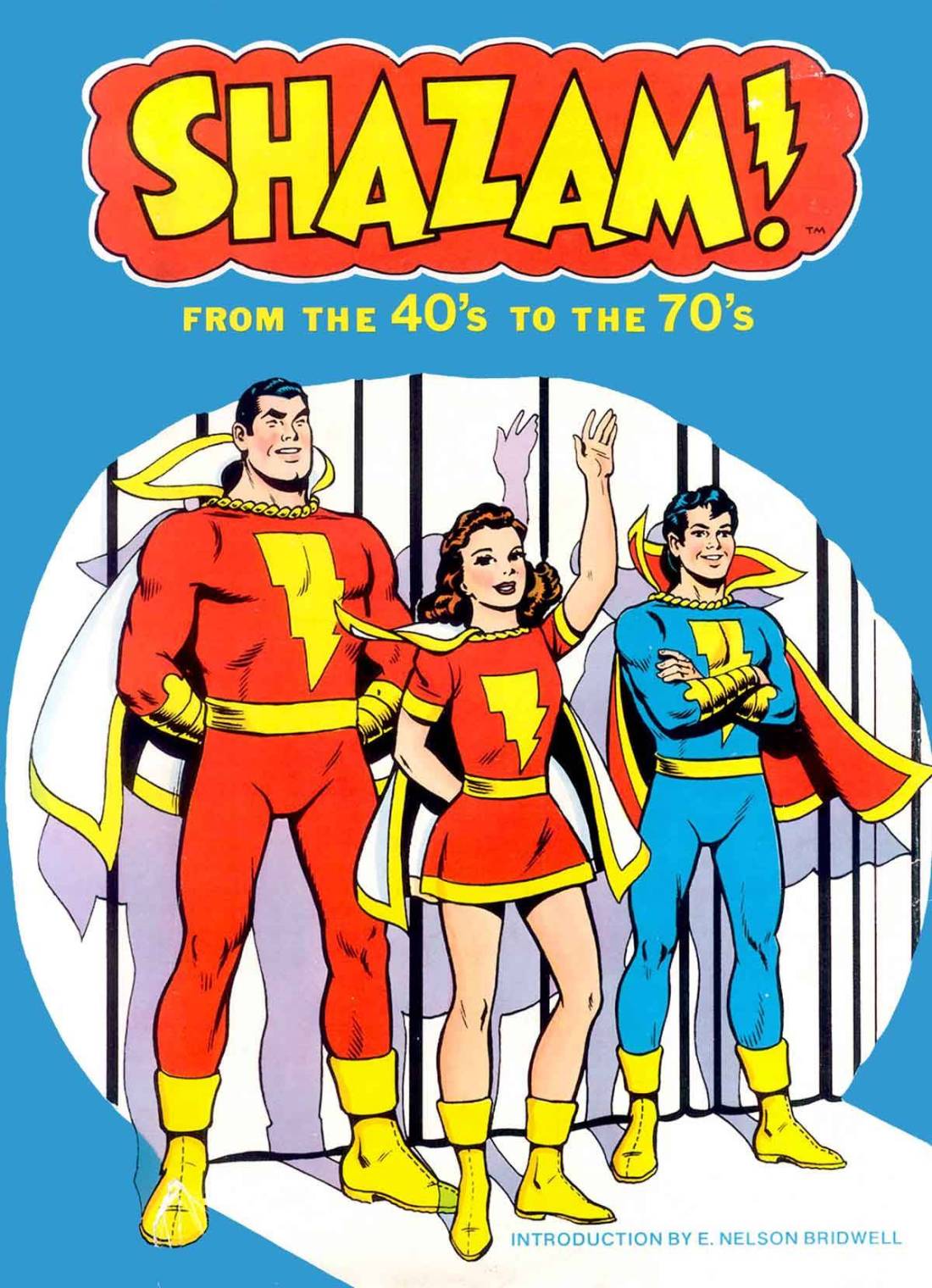 Today, there are thousands of books on vintage comics, both collections of material from decades ago or literary tomes discussing those works, how they were created, what impact they had and what they meant. But in the 1970s, the landscape for such volumes was exceedingly scarce. So it was positively an event when a new book about comics showed up at a local bookstore, And that’s exactly what happened this particular Saturday at the Smithhaven Mall when I first laid eyes on the just-released SHAZAM FROM THE 40s TO THE 70s. The book cost a whopping $12.95, but somehow my father agreed to buy it for me.

It had been years since the SUPERMAN and BATMAN volumes in this series of hardcovers had come out. (I owned the BATMAN volume, and read the SUPERMAN volume by taking it out of the local library) I presume that the success of the Saturday morning live action SHAZAM television series coupled with the overall nostalgia boom (plus DC making aggressive efforts to include the character in its licensing programs) led to the creation of this edition. At the time, the readers of Captain Marvel’s adventures in the 1940s and 1950s would have been the right age to have been prime targets for purchasing.

Regardless of how it happened, this book was a treasure trove of prime Marvel Family material. It opened with the very first Captain Marvel story, which I had already read in the FAMOUS 1ST EDITION Treasury that reprinted it,, then moved into the origin of Sivana, which I’d also read. From there, the origin stories of both Captain Marvel Jr. and Mary Marvel were reprinted–they had both previously shown up in a SHAZAM 100-Page Spectacular, but I hadn’t seen them there. And from there, the doors blew open to showcase a bunch of material that hadn’t seen the light of day since its original printings.

It must be said that, once they’d worked all of the kinks out, the Captain Marvel stories of the Golden Age were much more imaginative and much better written than a lot of what was done for other publishers, including a lot of the contemporary DC material. Much of this was the doing of writer Otto Binder, who once he came on board as a writer of Marvel Family adventures wound up writing something close to 53% of all of the material ever produced for the characters, a staggering achievement of high-quality output. Once Fawcett shut down production on the mighty Marvels, Binder wound up moving over to DC, where he plied his imagination in expanding the mythos of the Captain’s arch-rival Superman.

This was a grand collection of stories, assembled by DC’s reprint maestro and full-on Captain Marvel fanboy E. Nelson Bridwell. Nelson was, at the time, writing the ongoing SHAZAM comic book series, but he had been an avid reader of the character in his youth, and his introduction gives a fascinating behind-the-scenes look at the history of the Big Red Cheese, and a glimpse at how the character was being produced in the contemporary 1970s.

The 1940s section of the book was the largest, given that there were no Captain Marvel stories produced during the 1960s as a result of DC’s lawsuit against Fawcett Publications and the good Captain as an infringement on Superman. This section included both the first and final chapters of the 25-part Monster Society of Evil serial that ran in CAPTAIN MARVEL ADVENTURES for close to two years (CMA was so popular during this period that it was published every three weeks.) It would be years before I’d get to read the balance of this seminal story once it was finally collected in a slipcased hardcover in the very late 1980s. (Recent plans to reprint it have fallen through, likely due to its wartime depiction of Japanese characters, to say nothing of the way it handles African-Americans.)

The book included the one and only Golden Age appearance of Black Adam, the proto-Marvel who had become corrupted by his powers, and whom Goeff Johns turned into a major character in the modern day. (Geoff himself didn’t realize that Black Adam had made only one appearance in the original Captain Marvel run until having written him for some time.) Rounding out the cast, teh first two stories of Mister tawny, the talking, intelligent tiger-man, were also included, as was a Justice Society-style tale in which the Marvel Family battles their rivals in the Sivana Family in a story that spans five chapters, with the Marvels splitting up throughout the middle and only uniting in the final chapter to defeat their opponents

Moving into the section on the 1950s, the crisp and polished artwork of C. C. Beck is in evidence, backed up by Pete Costanza and Kurt Schaffenberger among others. The Captain Marvel stories during this period had deceptively simple-seeming artwork, but it was always beautifully composed, animated, and told the story with fluidity and style. The fact that most of this volume was run in black and white was actually a plus for these stories, which were ideally suited for black and white reproduction.

The very end of the tome jumps to the relative present of the 1970s and DC’s attempts to revive the character in the modern day. Bridwell is canny about which stories he chooses to represent here–it’s a good assortment of the best efforts of the modern DC team, including artwork by Dave Cockrum and Bob Oskner. But even as a kid, I could see the difference here. The revival stories lacked the authenticity of the originals–they were too staged, too put-on, as though most of the creators involved, while they might be able to suspend their disbelief at Superman or Batman, weren’t able to treat Captain Marvel and his ilk with the same sense of verisimilitude. It was no wonder that the revival of SHAZAM ultimately failed–somehow, the spirit of Captain Marvel wasn’t as easy to capture as it may have appeared. But in any event, I adored this volume, probably my favorite of the set, and read it to bits.