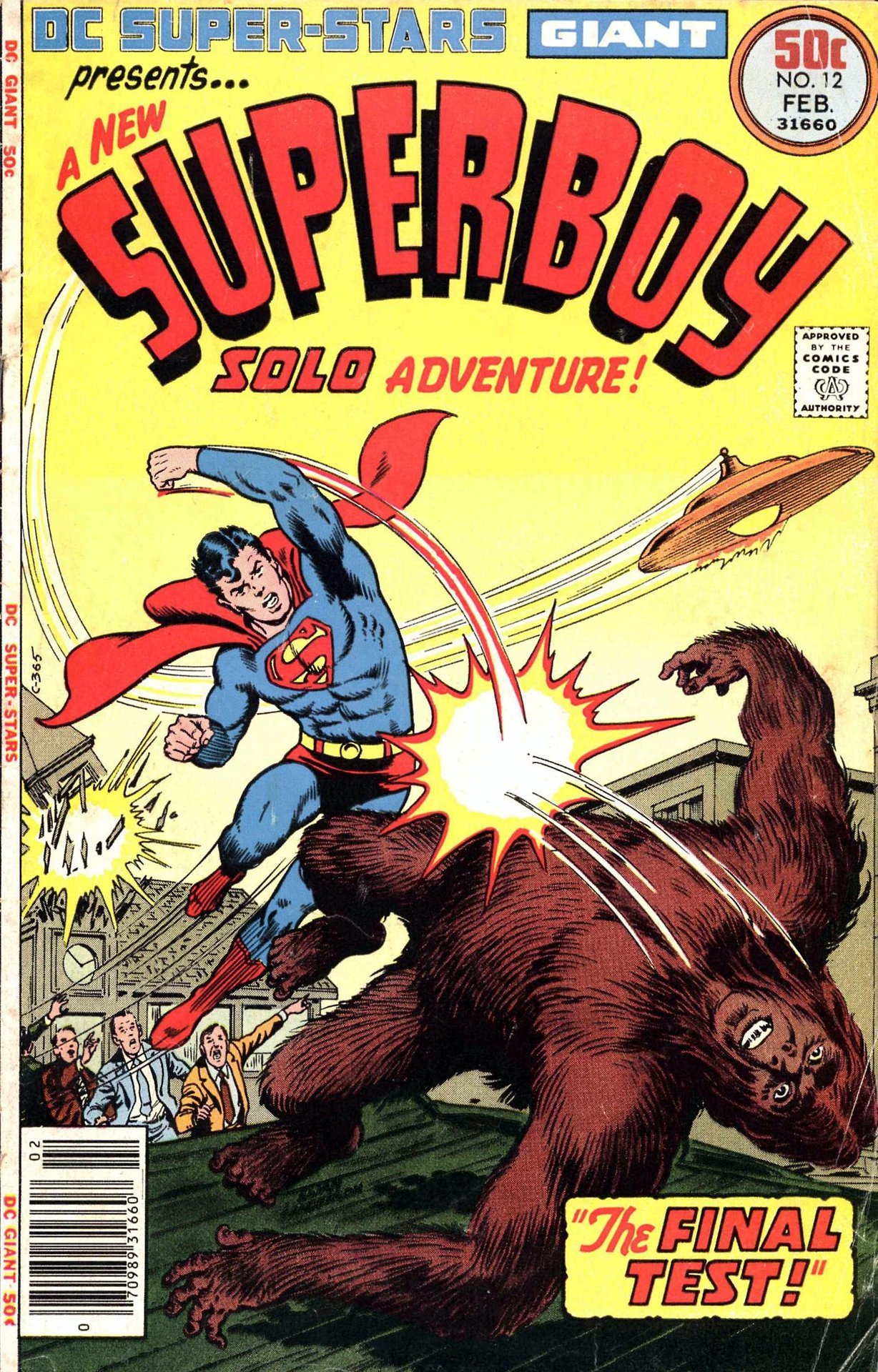 I didn’t get it when I was a kid, but then I was only nine years old when I first bought this issue of DC SUPER-STARS. But it contains perhaps the most wrong-headed and casually offensive Superman story of the Bronze Age. Somebody–a lot of somebodies–were asleep at the switch when they approved this one. So let’s investigate this classic tale in which a robot teacher from Krypton arranges for Superboy to rape a mesmerized girl and thereafter feel no remorse about it.

It must be said that this was a good-looking story, with the classic art team of Curt Swan and Murphy Anderson once again reunited. With the Legion of Super-Heroes having established residence in Superboy’s own comic, this was also pretty clearly a trial balloon to see if new solo Superboy adventures might be sale-able. Given that the Boy of Steel soon afterwards became the lead feature once again in ADVENTURE COMICS, I’m betting that the answer turned out to be yes.

The story opens with a modern day Clark Kent and Jimmy Olsen on a flight, during which Jimmy refers to their stewardess as “really prime”, an icky outlier  for what is to come. But the event triggers a memory in Clark’s mind, and his thoughts drift back to years earlier, when he lived in Smallville as Superboy. At the time, there had been a raft of sightings of a Flying Saucer that had the citizens in turmoil. But Ma and Pa Kent notice that their super-son seems more infatuated than usual in Lana Lang–and he is a High School kid by this time, so that’s normal. What isn’t normal is that, as class is about to start at Smallville High, the mysterious Saucer appears and destroys a statue of Superboy.

Superboy pursues the elusive Flying Saucer, and it gives him a good run for his money. But using his brains, he’s able to disable the ship and destroy it–learning in the process that its pilot was Jor-El’s teaching robot from Krypton. This robot had appeared earlier in a Superboy story reprinted in the back of this issue, and was sent to Earth by Jor-El to test Superboy at various points to make sure that he was able to use his powers responsibly. Now the teacher from Krypton is back to administer a new round of tests, as Superboy is on the cusp of manhood.

Becoming Clark Kent again and returning to Smallville High in time for that evening’s big dance, it becomes apparent that Lana isn’t the subject of Clark’s newfound infatuation–rather, that honor belongs to Misty, the most popular girl in school, who suddenly approaches Clark and asks him to dance, to the astonishment of the rest of the class.  But Misty tells Clark not to worry about everybody else and what they think–just in time for the Teacher to appear, reveal Clark’s true identity as Superboy, and start a big destructive fight. Fortunately, though, this fight is all an illusion, another test for the Boy of Steel, and one that he passes.

I need to show these next two pages together, as it illustrates how subtly and cleverly writer Cary Bates got this next plot point past the Comics Code, who would never have gone for it. That evening, taking Clark back to her home (where her parents are away), Misty reveals that she’s worked out that Clark is Superboy. The two passionately embrace–and then the next page switches to Ma and Pa the next morning commenting on the fact that Clark hasn’t been home all night. This is clearly meant to invite a reading-between-the-lines in which Superboy has lost his virginity with Misty that evening. And, indeed, the couple is inseparable in the next few days

And now we get to the meat of the matter. A few days later, Superboy intervenes when a trio of apelike beings rampage across Smallville. They’re meant to be the new star attractions in J. J. Farnum’s traveling circus, but Superboy realizes that Farnum has captured these critters to put them on display, and so he connives to release them back into the wild. This is another test on the part of his Teacher, as there will be times when Superboy will be called upon to make moral decisions apart from the laws of man. Then, suddenly, Misty is there with them, and one of the now-freed creatures hurls a rock that strikes her in the head, killing her instantly.

Superboy files into a rage, but exercises restraint and does not kill the creature that killed his young love. This, of course is the Teacher’s final test, to make sure that Superboy’s code against killing was ingrained enough to prevent such a thing. But now we get down to the nitty-gritty. Not only isn’t Misty really dead, but she isn’t even Misty at all. The Teacher explains that he selected a girl based on a computer calculation designed to locate the perfect physical match for Superboy’s desires. He then implanted her with a false memory and personality such that Superboy would fall in love with her. And then, of course, have sex–thus setting up this final test. Now that it’s done. the Teacher will restore Misty to her normal identity and life (from which she’s been missing for what must be weeks, and with no memory of this violation) And for all that he’s upset about this revelation (and demands to be called “a man” by the robo-pimp who set this whole thing up), Superboy doesn’t spare a single thought for this poor girl and what’s been done to her and what she’s gone through. The tale wraps up back in the present, where we see that the “really prime” stewardess is, in fact, Misty herself, seemingly none the worse for wear. But I think we all know better. There really is no excuse for this story and its events–it’s atrocious.

As mentioned earlier, the back-up story is a reprint of the earlier story featuring the Teacher from Krypton, in which he shows up from space to test Superboy’s mastery of his powers and his cleverness. If the Boy of Steel fails, he must give up his heroic role forever. And fail he does, ultimately, and agrees to the Teacher’s sentence-which is, of course, the final test. Having proven himself, Superboy bids the Teacher goodbye as the robot departs for deep space, no doubt to begin organizing his sex trafficking ring for their next encounter. Yuck.

Join 41,169 other subscribers
Follow The Tom Brevoort Experience on WordPress.com