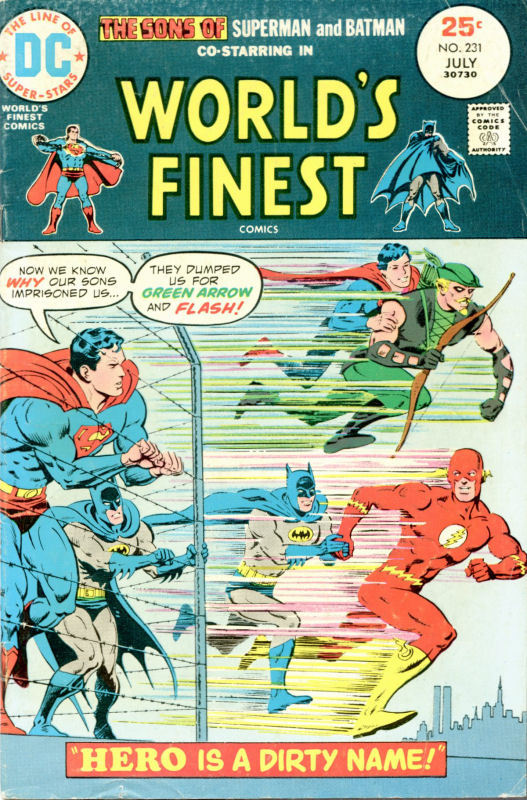 WORLD’S FINEST wasn’t anything like a regular buy for me, the earliest issues of the title that I had read were somewhat odd and discordant to me–the stylistic difference between my preferred editor Julie Schwartz, and the approach favored by WF editor Murray Boltinoff. But the appearance of the Flash on this cover was enough to get me to drop a quarter on it.

This would have been the first story I read featuring the Super-Sons, although I was aware of them at the time, having seen other WF covers featuring them in house ads. For those who are unaware, the Super-Sons were Boltinoff and writer Bob Haney’s attempt to appeal to a younger demographic by revealing that Superman and Batman had secretly married and had kids, who themselves were now teen-agers. None of this jibed with what was going on in the other DC titles, but they didn’t really care, and Boltinoff insisted on letters page after letters page that the Super-Sons were real.

And the idea with the Super-Sons was to be able to do Superman and Batman stories that more accurately reflected the concerns of the youth of that era. In that way, they were perhaps the comic book equivalent of the Mod Squad.Unfortunately, while the intentions behind the Sons were good, there was no changing the fact that the stories in question were being written and illustrated by middle-aged men with the values of that generation, not the one they were trying to represent. So most Super-Sons stories tend to amount to the Sons learning that their own deeply-held beliefs are bunk, and that really their parents and adults in general really do know best.

This particular story opens with Superman and Batman making a daring rescue of a crippled airliner. But after the day is saved, the grateful citizens of Gotham turn out to honor the heroes–but the event is interrupted by a band of protesters, namely Clark Jr. and Bruce Jr. They accuse their parents of being nothing more than glory-seekers, peddling cheap heroics and grandstanding when actual problems like war and poverty are rampant.

In response to the protests, Superman and Batman agree to a mock-trial accounting of their careers, somewhat-arrogantly convinced that they will be acquitted of any wrong-doing. To the heroes’ great surprise, however, the tribunal finds them guilty, and they are sentenced to imprisonment in what looks like a VC concentration camp in the center of Gotham, until their “consciousness level has been raised.”

Sadly but smugly, the Super-Sons go on their way–but it isn’t long before they each find themselves performing the same sorts of heroics they’ve convicted the older generation of. They each lamely excuse their own decisions, though, and the trail they begin to follow involves criminals messing around with the weather. Following the villains to Midway City, the pair is saved from harm through the intercession of Green Arrow and the Flash, who are similarly pursuing the criminals in question.

But the Super-Sons refuse the assistance of the older heroes. Following the tail of Tempo, Inc. to an oil drilling platform, the pair are again aided by a Justice Leaguer, this time Aquaman, who helps them prevent a tsunami. The Sons figure that all of these heroes are really just their dads in disguise, attempting to teach them a lesson, but each time they check up on their fathers, they find them right back in the gulag where they were left, serving out their sentences..

Following a message from Green Arrow, the Sons join him and the Flash as the site of a missile launching, which Tempo Inc. intends to use destroy the ozone layer and melt the polar ice caps. The four heroes intercede, preventing the missile from being launched and mopping up the rest of the faceless Tempo Inc. crowd.

And so, having come to have a greater respect for super-heroing, the Sons return to free their fathers from the gulag. And, of course, Batman whispers to superman that it really was the two of them as Flash and Green Arrow and Aquaman for most of the adventure, but Superman dismisses the fact that they lied to their sons and broke their word to the courts with some cheap double-talk. And now the sons are thinking right! So screw you, younger generation! Ha! Ha! Ha!