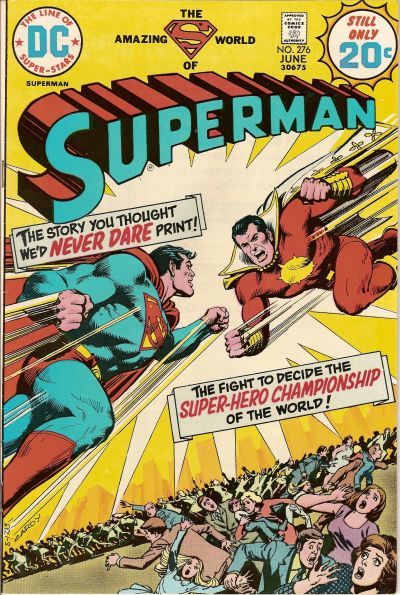 Not 100% sure where I bought this book. I have a vague sense that I got it on a shopping trip of some kind, rather than through any of my usual places. In any case, it was a good follow-up to that SHAZAM Treasury Edition, even if I didn’t quite get all of the jokes and references in it.

As the cover seems to promise, this issue features a battle between Superman and Captain Marvel. But not the actual Captain marvel–for some reason, even though DC now had the rights to the Captain, they chose to use a similar surrogate. So, on Page One, we are introduced to Willie Fawcett, who is secretly Captain Thunder.

By speaking the magic word Thunder and rubbing his enchanted belt buckle, Willie is transformed into the Mightiest Man in the World. But not this world–Willie finds that WHAM-TV has been replaced by Morgan Edge’s Galaxy Communications, and his apartment doesn’t exist. He’s in the wrong place.

To make matters worse, whenever Willie becomes Captain Thunder, he is seized by an irresistible compulsion to commit evil. This, of course, leads to a skirmish with Superman which Thunder escapes from by transforming back into Willie, thus leaving Superman confused about his disappearance.

Realizing that he has a problem, Willie seeks out Clark Kent at Galaxy Communications, having learned that Kent is a friend of Superman’s. He fills the bespectacled reporter in on his origin–how he was empowered by an ancient Shaman with the power of nature itself, and how Captain Thunder battled evil in his home dimension.

And how Captain Thunder defeated the Monster League of Evil–but nt before they laid a whammy on him that corrupted the Captain. Willie needs Superman’s help to both restore his other self and to get back home.

This leads to the battle promised on the cover, when Willie, seeing a crime in progress, instinctively triggers his transformation once again, sending Captain Thunder hurtling at Superman. Neither combatant can really hurt the other, but this is a well-staged battle that shows each character using his abilities in clever ways.

To break the stalemate, Superman tricks Captain Thunder into saying his magic word and becoming Willie again. He then proposes to hold Captain Thunder in an unbreakable hold and force Thunder to use his mystic wisdom to overcome the Monster League’s hold on him and to find the way home.

It’s a very fun story by Elliot S! Maggin, with great art by Curt Swan and Bob Oksner–artwork which made Captain Thunder fit into the world of Superman a bit more smoothly. I suspect that had DC used this visual approach when they resurrected SHAZAM, it might have met with more acceptance. It’s really beautiful work, straightforward and opening and inviting–the kind of thing that made Swan the predominant Superman artist for decades.