There were some relatively professional fanzines published by the late 1970s. One such fanzine was Woweekazowie, the fourth issue of which concerns us today. It was produced by Pete Iro and was staffed with contributions from people who would either go on to work within the comic book field itself or who would circle it for years as Big Name Fans. Iro himself was an artist and an excellent letterer, whose work improved the professional quality of any fan story that he lettered. He tackled many of the fan comics in this issue. But not all of them.

This particular issue includes a short 8-page super hero strip both written and drawn by Mark Gruenwald, who would go on to be Marvel’s Executive Editor as well as the writer of CAPTAIN AMERICA, D.P.7 and QUASAR. The story has a bit of an unfortunate slant to it, one that’s very much a byproduct of its era, I expect. But Mark plays it absolutely straight (so to speak.)

Woweekazowie #4 came out in 1978, and my guess is that this story was produced by Mark shortly before that, and definitely before he came on staff at Marvel. But really only just before.

Like many others, Mark had developed his artistic skills in the hopes of breaking into the business as a penciler, but he found that he was better suited to being a writer and an editor. On occasion, though, he’d still pencil the occasional project, such as the HAWKEYE limited series that he also wrote. I’m guessing that he also lettered this story.

Woweekazowie #4 also included this fun page by cartoonist Alan Jim Hanley, a person whose work I want to do more on in the future. Here, Hanley’s love for the comics of the Golden Age shines through (he was best known as the creator of Goodguy, a homage to the original Captain Marvel) though at the same time he can view those stories and characters with an unvarnished modern lens. 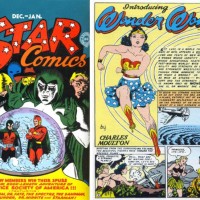